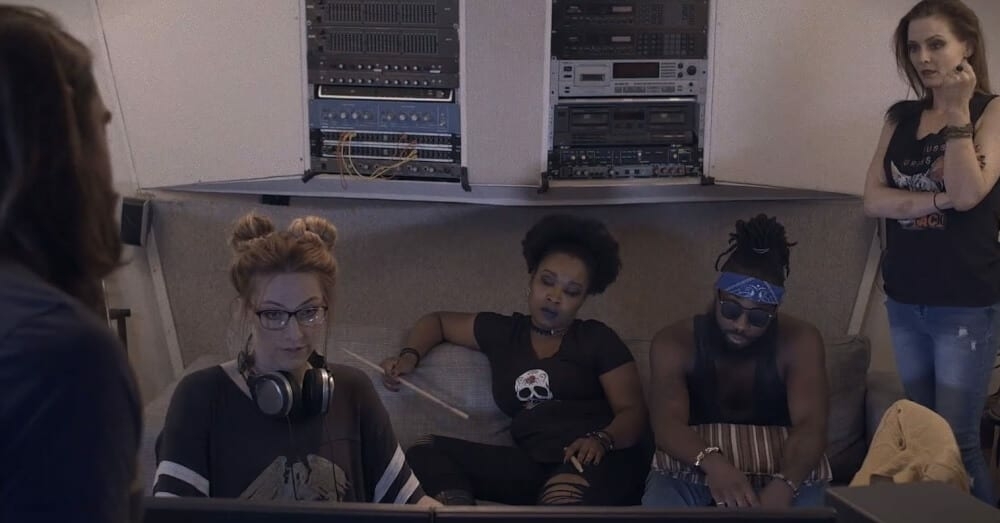 Under the directorial hat of Daniel Wyland, ‘Superstar!’ opens to percussions, bass and rock music giving a fitting start to a 23:20 minutes long film. The short talks about a group of six people whose endeavour is to deliver a self-composed music piece at a songwriting competition. If they crack it, they stand a chance to win the $10,000 Grand prize!  But is it as simple as it seems? Can you expect camaraderie in ? The film is a narrative answering that chaos! And, Wyland ensures that you remain hooked until the very last scene to have your burning questions answered, for ‘Superstar!’ is full plot twists and riveting turns.

Scriptwriter Legrand McMullen explores how real life isn’t much different from the reel; that the deliverance of a masterpiece is no accident. Teamwork comes only with assuaging one’s grudges and egos and it’s an uphill task for anyone. For, at the end of the day, nothing counts more than the ultimate performance! The pace of the film (edited by Jordan Miller) is deliberately kept unsteady to make the audience aware of the unpredictability shared amidst the characters. Whilst the dialogues are hardly given a poetic tone to it to maintain the authenticity, it’s the acting that sustains the narrative.

Bex (Amanda Forstrom) and Carl (Jefe the entertainer) are apt for their roles, adding the necessary tenor to the plotline. Wyland’s simplistic style of cinematography is soothing to the eye as much to the script. His attempt at keeping the shots within long and medium angles adds to the visual intensity of the storyline. It’s, however, the background score that’s most effectively used. Jordan Miller responsible for the location sound and post sound mix and Gina Biver for surround sound mix deserve a special thumbs up. The beats of the drum, the thunderous clap sounds; all elements of grunge music add to the crescendo until the audiences have no choice but to revel in the musical marvel! Wyland keeps the look close to reality, as much possible; and opts for the real set-up of a music studio and the warm colour tones of light to retain the relatability. His work pays off!

‘Superstar!’ is worth any rock music aficionado’s time! But, also a revelation to those stepping into the arena of music, art and performance!

#ShortFilmReview: Watch 'Superstar!' to find out what happens when six musical minds come together! Click To Tweet