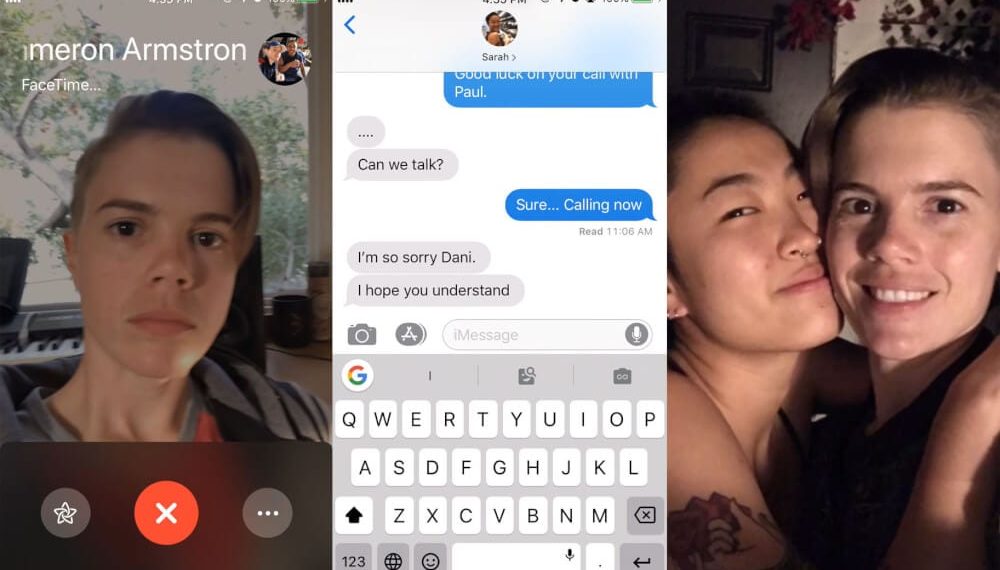 Co-written and directed by Keaton Wooden and Dani Shay, ‘Shooting Star’ opens with the film ratings’ certificate. The usual green certificate shrunk to smartphone screen size and its wordings swapped for the film’s credits; you know at that very instant that you’re in for something novel. Set in the modern day and age, ‘Shooting Star’ is a love story unlike any other and yet, a love story like every other.

Sarah’s (Cleo Kim) open-marriage to Paul (Jared Winkler) is met with little acceptance from the latter. Her love for Dani (Dani Shay) is raging conflicts within her. And, while none of them are to be blamed in this virtual ménage à trois, someone has to bear the cross. Edited by Keaton Wooden, the film explores the dynamics between the three and their relationship to Sarah. What sets this one apart, however is the fact that they are all paced at the swipe of one’s thumb.

The directors ensure that you soak yourself in the millennials’ world of FaceTime, Texts and WhatsApp. The entire film narrated through a series of conversations that span over a fortnight across various social media platforms is eerily familiar to those already accustomed to using the network. But, instead of making them seem like a barrier, the directors transform the digital screen into the fourth wall. We see Sarah’s woes crackle as she deals with the perplexities of her heart, Dani’s anguish and Paul’s testing patience.

The storyline although seemingly obvious is challenged interestingly with the setting of its picturization from horizontal to vertical. As you look into your screen, you see the lives of these individuals play out in front of you, reminding you of the countless hours you would have spent looking into the very screen, talking to some loved one(s). Produced and composed by Reed Vertelnet, and rendered by Dani Shay “Shooting Star” plays in as the climax draws close, giving a fitting closure to all the characters and audiences alike!

Winkler as Paul is believable, suffering in equal measure with Kim’s character Sarah. Despite their relationship playing out in texts and FaceTime, there’s knowing chemistry between them. Kim as Sarah is outstanding! The goofy scenes with her friends and the agonizing call with Shay are just as natural as it can get. Shay, however, raises the yardstick here! With an amazing rendition to the track “Shooting Star” and an authentic performance, he moves and affects the audience; just as much he does his listeners at the gig in Los Angeles.

‘Shooting Star’ is a must-watch for all fans of love, music and connection alike and with the virtual space at its backdrop, it couldn’t have been anymore time relevant!

#ShortFilmReview: 'Shooting Star': This digital love story is as modern as it can get! Click To Tweet