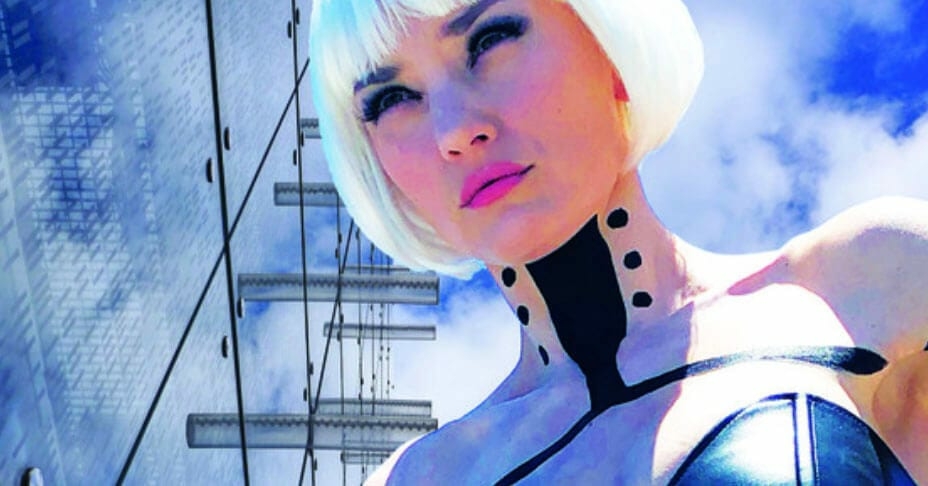 This action-packed documentary of 9:40 minutes in duration is about a filmmaker, Jeff Leroy, whose craft is controlled by tight purse strings. His films, made on a shoestring budget are in no way a hindrance to his lofty ambitions and dreams, however. This one stars three women who upon consuming some pills (supposedly) grow into enormous giants. The documentary makes a funny and an intriguing take on the shooting schedule of the short with a set up on the rooftop of the filmmaker’s home, of all the places!

Filmmaker Leroy has made the sets himself. The miniature models are a testament to the micro-budgeting of the production. Complete with a Drumpf Tower and freeway, it not only showcases the constraints of the budget but also makes one marvel at his dedication to details. He has no army of dedicated assistants to direct his actors and he steers his own course by explaining the scenes himself and ing the rest to the imagination of his cast.

The actors, Tasha Tacosa, Rachel Reily and Vlada Fox have a tough job to pull through. They take in the director’s inputs, add their own touches and leave the rest to the charm of the cinematographer to work on. In their own words, they get one shot, two if they’re lucky. They sportingly smile through every fall. With casualties, mishaps and accidental falls, the actors bring out the true essence of acting on the edge. As Tasha says, this is the best school that anyone can learn from.

The cinematographer states of having dreamt of working on a Jeff Leroy movie. He sets his camera right on the ground to bring in the effect of the giant amongst the dwarfed set. This brings in a lot of vision and introspection, for as they say, nobody inspires them as much because of their unrestricted liberties with the lights and equipment.

Director Jason Kartalian brings out the true essence of micro-budget filming, by giving us a peek-a-boo into the production of the film ‘Mecha-Fembot Vs Giantess Attacks’. As audience perhaps we under-appreciate this style of film making, as we don’t have the understanding of its essence and the amount of work that gets into simply even completing it. With the margin of errors being so limited, one can very well understand the constraints imposed upon the cast and crew to pack up their act within days of commencement of the shoot. While the whole filming of the climax is made to look frivolous, or at best, light-hearted, it is indeed a master-shot. You realise there was a method in Jeff’s madness after all!