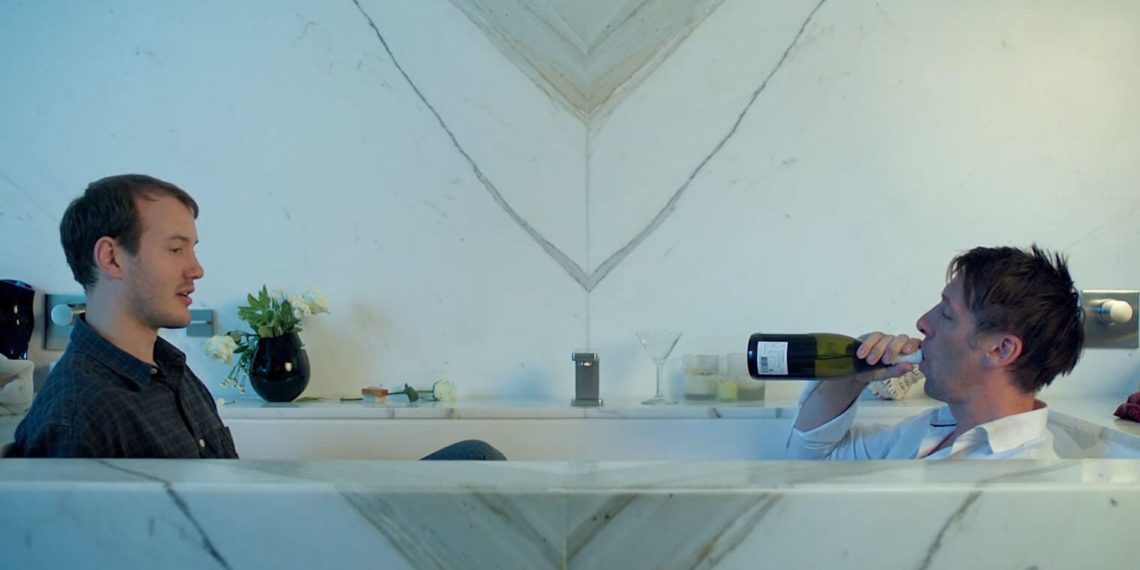 That one cannot be saved if they don’t want it themselves evokes melancholy even without necessitating a context. Then there is Freddie Hall’s ‘Dead to the World’; an undeniably melancholic short, carrying with it a few laughs to lighten its hard-hitting truth.

‘Dead to the world’ is a mature and eccentric dark comedy with the story centring on a sobriety coach, Ben, played by the charming Jonny Sweet, attending to Oscar-nominated but troubled film star, James McCann (Craig Parkinson). Though his job is keeping James sober who is contractually obliged to remain so and ensuring that he remembers his lines; the job isn’t all that it’s cracked up to be! The nonchalant attitude of the spoilt, privately disgraced star under a sobriety contract foretells the events. The script (D.C. Jackson) is witty, with a cross over from decent to good to high­- jokes with a perfect balance. But it is the excellent acting of the two characters who, with a well-paced plot and hilarious chemistry on screen turn the little grins into laugh-out-loud moments.

Beginning with an appreciable camera work (Tom Wade) and catchy music (Jon Wygens), there’s no happy beginning or end to the film; instead, it lingers like the fourth character, an empathetic friend, who has resigned to the fate of its protagonist but does so with humour anyway. Wade uses the frame remarkably well, following the characters effortlessly and revealing only as and when required, which is praiseworthy. (For instance, the locked liquor storage scene is the classic example of one such revelation. The punch line isn’t in the dialogues but in the frame’s revelation. Likewise, Jackson is smart with his characters; the eccentric and troublesome McCann is the nemesis while the lead actress of both the films, Susan Lynch, played by Emily Tennison, is the catharsis, while the disarming Ben is the projectionist of the outsider’s view.

Without giving away any spoilers, the bathtub scene is again one of the best shots of the film (although it’s really hard to pick one)! Ben’s story narrated in the bathtub instantly tugs at your heart. McCann’s apathetic laughter to it spins the conversation, however, swinging it between its varied genres. McCann, despite his obvious callous attitude, is likeable. That’s the beauty of Jackson’s writing and the collective success of the cast and crew that they manage to make even the , unlikeable characters charming.

The movie’s highlights are in its very impressive camera work, delivery of the humour through many means and the chemistry between the characters. The jokes are quite good, the snarky and sardonic McCann pulls off a very good job, while Emily’s practical and reasonable element balances the flavour, with Ben’s charm adding to the final seasoning.

The pace of the film is steady, (edited by Adam Moss), the writing is fresh and the characters are a delight on screen, despite their subtext. ‘Dead to the world’ is anything but dead! It’s a must watch for all cinephiles and aficionados of layered genres, despite any personal favourites.