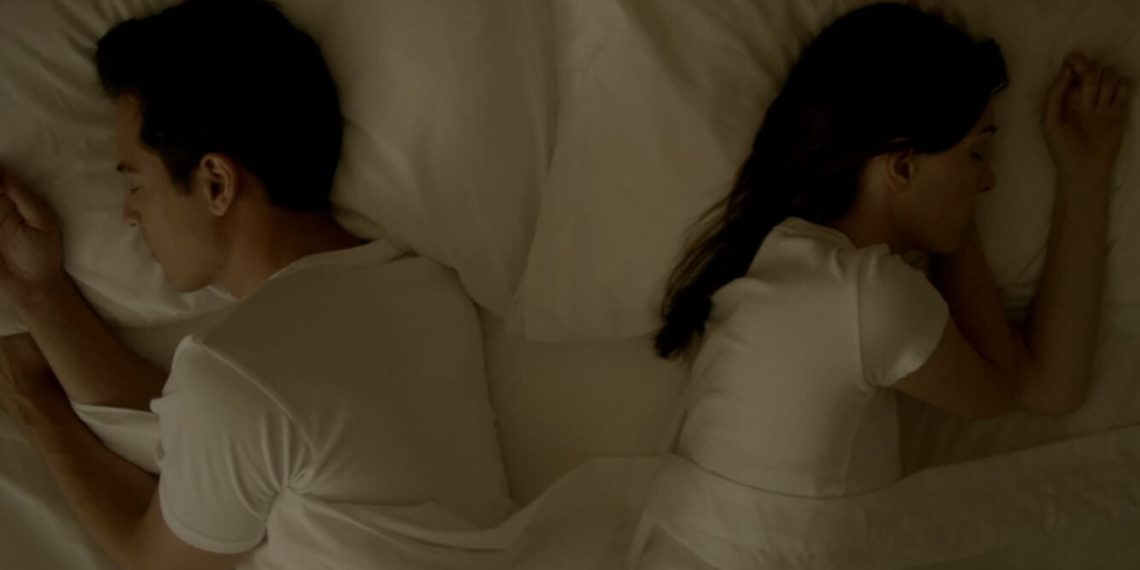 Horror stories generally stand to be a victim of unfulfilled desires. But, co-directed by K. Spencer Jones and Jake Wilkens, ‘A Thing Of Dreams’ is a flawless rendition of 10:49 minutes of pure drama, thriller and horror. With the brilliant deception of nightmares incorporated, the screenplay (Jake Wilkens) takes a detour from the usual, thus offering a skewed lens to the tried and tested. Add to that a dash of science and psychology and the film goes beyond the conventions of the horror narrative and its genre.

A seemingly happy couple with a routine lifestyle shares a secret. Unbeknownst to the world, their secret; a dark one, is what seems to keep their marriage sustained. Dependent on drugs to induce dreams, the couple share their dream sequences every day, like a breakfast conversation, it’s that routine. What nearly breaks the monotony and the marriage apart is the contents of the dream, which until some point John presumed he was privy to.

John (Marcus Coloma) and Mallory (Stephanie Scholz), play the couple. The cracks of their marriage apparent from the word go, the screenplay doesn’t take long to give cues to their characters. Scholz is brilliant from the very first frame. The hint of disinterest, the feigned interest, the alarm and despair at the trouble brewing between them, Scholz brings Mallory to life. Coloma, on the other hand, has perhaps more dialogues but is equally convincing in the jealous partner he plays. When it’s discovered that their dreams aren’t exactly what they expected it to be, John begins to have his reservations. The dwellings of an unstable, unsettled mind are plain to see in him. But, perhaps nothing could have prepared for the coming intervention. The story unfolds into the deep ravines of one’s mind and the subconscious as the nature of the dreams are revealed.

Kevin Garrison ensures that the film carries its vibe from the very first shot. With a constant ebb and flow to the narrative, the film is not only engaging but deliberately crafted so to create the lasting impact. When John becomes jealous, unable to cope with Mallory’s dreams, he does the unthinkable. Coloma and Scholz even in their dying marriage, hold a brilliant chemistry, giving a wonderful arc to their respective characters. Garrison’s camera gives the dark ambience of the film an aesthetic tenor. Sure, the usual tropes are involved as is the music (Travis Warner) that typically accompanies this genre. But, what sets ‘A Thing Of Dreams’ apart is the deep psychological subtext it carries of human emotions. The visual effects are stunning, especially in the scenes where Mallory wakes up to find herself in the forest. And, with Jones’s neat editing, the film feels aptly timed.

It’s a novel idea that deserves more complex a narrative to keep it satisfactorily engaged. With a wonderful cast like these, it certainly could have offered more. But, nonetheless, ‘A Thing Of Dreams’ is a deflection from the usual we are so accustomed to seeing.

Watch ‘A Thing Of Dreams’ to relive the nightmares of your unchecked mind!

‘Mirror’ Is The Inner Turmoil Of A Trapped Soul...