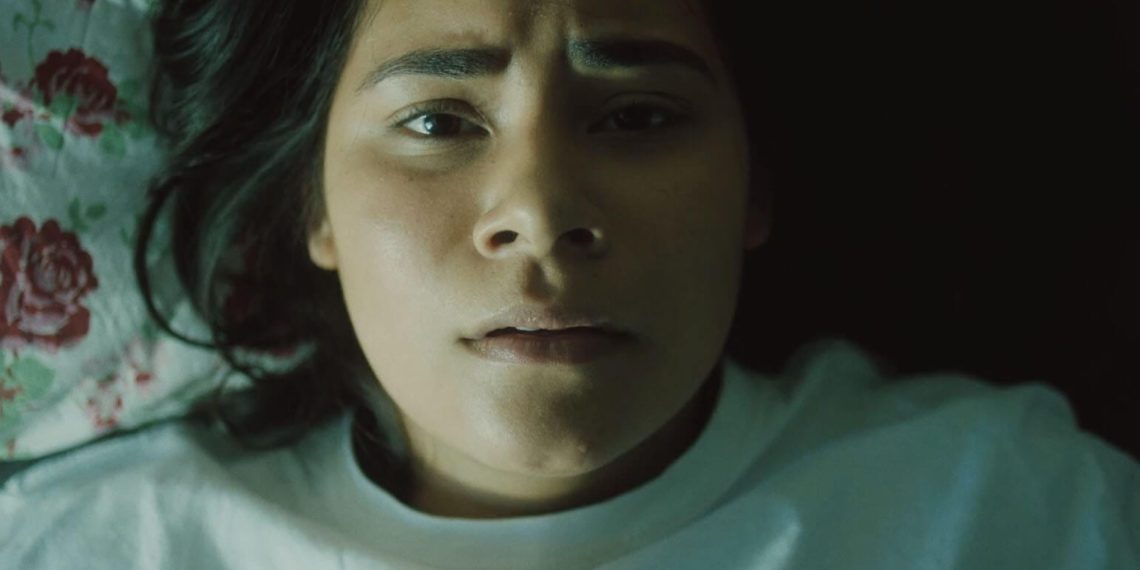 If the title of the review doesn’t give away the plotline, then nothing else will. It’s as simple as that. A pregnant woman with a failing eyesight longs to hold on to her vision just until she gives birth to her child, to have that one, long, lasting look of her labour’s fruit. Sounds unique? Let’s throw in some more twists, shall we? Director Anssi Korhonen doesn’t believe in doing anything in half measures. With just two characters in a 14:48 minutes long film, the story has to be gripping to sustain the film.

Sofia (Wendy Rosas) is a first time, expectant mother; her pregnancy marred by her failing eyesight, she visits her doctor (Dr Silberman played by Michael Pitthan) regularly. It doesn’t take long for the audience to establish the plotline, for the film starts itself with a foretelling of the events to come. We see Sofia struggle with not only the physical impairment befalling her but also the mental anguish it is leaving her in. Rosas as Sofia is brilliant. She brings in a measured performance to the character. Watch for the scenes where she talks to her mother over the phone about the baby shower or sings the lullaby she has grown up listening to her, to her unborn child! They are touching, and not simply for the intent of the scenes! It takes an experienced actor to bring out such genuine portrayal of the characters.

There’s a difference between playing someone blind, partially blind and someone on the verge of losing their eyesight. This thin line of difference is well captured in Rosas’s portrayal of Sofia. But, Korhonen ensures it isn’t just that. The routine checkup with the doctor, Dr. Silberman reveals that she may be suffering from Charles Bonnet syndrome (CBS) as well (loosely translated into hallucinations experienced by people with failing eyesight). This explains our third character, a mere silhouette that appears before her eyes, played by Holden McNeil. McNeil as the shadow is terrifying and spooky at the same time. Each time he appears on screen, we feel the chill run down our spine. We begin to hope for Sofia’s sake that she makes it. And, we wonder if it’s just the loss of her vision or of her mind as well that’s resulting into the birth of such horror.

Ville Juvonen’s music that accompanies the film gives the necessary, chilling vibe to it. Without being overly used, it just remains right enough to support the film and yet its own, unique take into the narrative. As Sakib Nazmus’s camera captures the failing world of Sofia, one can see the way Nazmus’s camera plays with the light and brings to screen with such finesse the world of a woman and the enclosing darkness within. The script (Korhonen, the genius, again!) is brilliant! It defies the convention of compartmentalizing the film into a genre. By adding touching moments of a mother and her unborn child, the script breezes in between drama and thriller-meets-horror effortlessly. With well thought out characters played by equally talented actors, including Pitthan & McNeil, the film raises the bar to an altogether high.

As the climax approaches, the director uses the cyclic narrative style and as audience you are brought to the very edge, anticipating the worst, hoping for the best and the finale closes in with such aplomb that it reverberates across for its sheer, hard-hitting reality. When the fine line between fantasy and reality is crossed, the cacophony born, can find no place to escape. ’42 Days’ is gripping, gritting and undeniably impactful.