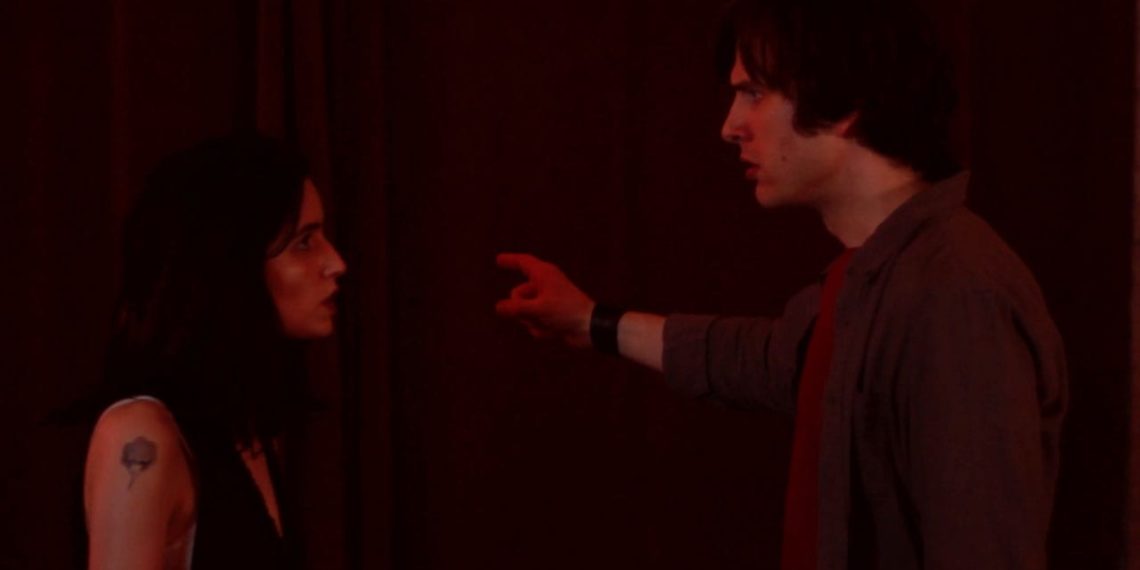 Dramatic and suspense-ridden, The Shadow Scarf is a layered display that sways between being hair-raising and suspiciously predictable as the movie attempts to explore the question of culpability of the bystander.

Clay von Carlowitz’s Jeffrey, a bartender in NYC, finds himself in the company of an alluring stranger on a particularly foggy night as he awaits a visit from his brother. Aurora (Asta Paredes) the mysterious stranger walks in, to the empty bar; hoping to perform for the open mic night. She sings; he swoons, she talks; he fumbles, they converse and a spark is lit. But, it doesn’t take long for the conversation to steer from interesting to discomforting.

Cinematographer Max Marcellus begins well with both; shaky and steady mid shots, subtly moving on to close-ups as the narrative catches heat. For the majority of the screen time, the film is shot like a play, leaning on writer/director von Carlowitz’s forté, a drama major from Kenyon College. At the height of the storytelling, Marcellus uses a shaky handheld camera, effective but perhaps better suited to limited use. Other close-ups, namely of Aurora’s hands (holding a glass, extracting a scarf) look deliberate as if the maker wanted us to have a slice of her, unveil that coat of mystique of hers. The scenes are mostly well edited (Antonio Piluso) save for a few instances where it either cuts too soon or too late, making them hurried.

Von Carlowitz places his character to the left and Paredes’ to the right of the frame, a subtle illustration of the power play; he does the same by framing Aurora in bright light while keeping Jeffrey more shadowed. Jeffrey is written to be dislikeable, channelling a frat-boy vibe and von Carlowitz successfully translates that on to screen. However, at times, his performance feels contrived and unnecessarily loud. Asta Paredes is enigmatic as Aurora, giving some nuanced touches to the character but perhaps lacks the maturity and angst the character demands.

Grant Swift Glidden’s original score and the songs used in the film have a distinct 90’s vibe to them and sit smoothly with the mysterious tone of the movie. Bathed in reds, it carries a reminiscence of the 1977’s Suspiria but ‘The Shadow Scarf ‘is at once, both; spooky and mesmerizing in its look. The set has been designed to feel like a theatre and it adds the tingling sensation it renders to the impending horror. The purple-pink of the fog is eerie on its own but does not blend well with the look of the rest of the movie; it clears out as soon as the first scene commences.

The Shadow Scarf sets out to explore an interesting premise, boasts of a good background score and alluring look. With the plugging of a few crucial misses, it could easily make for a thriller that people would want to revisit.

The Shadow Scarf Is About The Past You’d Have Preferred Forgotten...