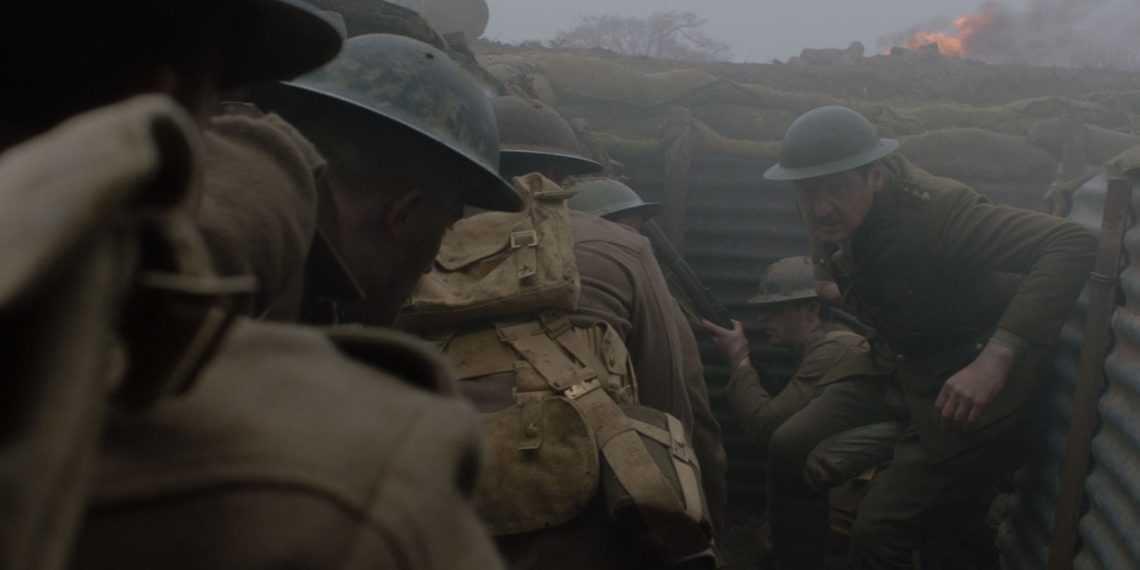 ‘Their War’ does not intend to leave you bawling your heart out or shatter it outright. No, it quietly plants the sprouting seeds of a stinging pain within you. The cast carries this knowledge with them and they remain true to it, not breaking outright either and that’s where ‘Their War’ wins – in the measured performances given by its actors.

Arthur Jeffries is a 20-year-old boy who enlists in the British army as the First World War breaks out, leaving behind Mary, his pregnant wife. Nikolaus Seifert, a skilled gunman finds himself good at something he abhors – killing. The two men, their seemingly separate lives are intercut into ‘Their War’ to weave a narrative of a war that isn’t and has never been merciful.

The main cast gallantly shoulders the film with deep, nuanced performances. Des Carney as Nikolaus is restrained, his character quietly carrying the burden of his skill and the accolades that come with it, giving a riveting performance. Hamish Riddle, playing the role of Jeffries, is a brilliant find and plays the role of the inexperienced but earnest (very) young man with endearing charm. That war is not a place for the young does not need exposition, it sits with woeful comfort on Jeffries’ face. Katharine Orchard as his young, pregnant wife is effective in her limited screen time. When she breaks, it is quiet; when she is resolute its quiet;  brave in the face of bereavement, she wears the emotions of a lover, wife and mother effortlessly. Captain Hornshaw played by Benjamin Hartley, a stand-in for a father figure for Jeffries amidst the deafening war is another addition to this stellar cast. The grim look that passes his face for the tiniest moment as Jeffries puts down Mary as the next of kin is praiseworthy. Elif Knight, Nikolaus’s wife, shares a compelling chemistry with Carney, giving glimpses of a mature but intense relationship.

The film makes a clever portrayal of the protagonists’ relationships and the accompanying revelations of its characters. Arthur and Mary’s bedroom is painted in light colours, their clothes are either pastel or white in shade; they are young and naïve, braving a marriage, a pregnancy and a war, with only their utter inexperience and love for another being their guide. Mary is up as she kisses him goodbye but Anna wakes up just as Nikolaus leaves. Anna and Nikolaus are portrayed in darker tones, sharing a deeper bond and knowing their way around the world. Composure earned only with time is shown both, in, Anna and Nikolaus, while Arthur and Mary are made of springy hope and self-imposed calm.

The entire film is shot on location (East Anglia, England) with a handheld camera save for when Arthur enlists in the army, then it stays stock still, perhaps a physical manifestation of the precarious calm that Arthur enforces upon himself. The unsteadiness in the rest of the film is well conceived, transferring a sense of immediacy to the audience. The fight scene between Seifert and Jeffries is shot in close-ups, placing the disquieting reality of war right in the audience’s face. The fight does not bear evidence of choreography, for it is raw and gruesome.

Max Mason does not make a heavy-handed exposition-filled preaching in ‘Their War’, opting instead to let the visuals tell a powerful story. ‘Their War’ isn’t just theirs. It is brought right to your doorstep with moving performances and stunning visuals of a moment in history best forgotten, but almost never forgotten…

The First Casualty In ‘Their War’ Is Going To Be You!
4.2 / 5 Stars
Direction
Cinematography
Screenplay
Editing
Music