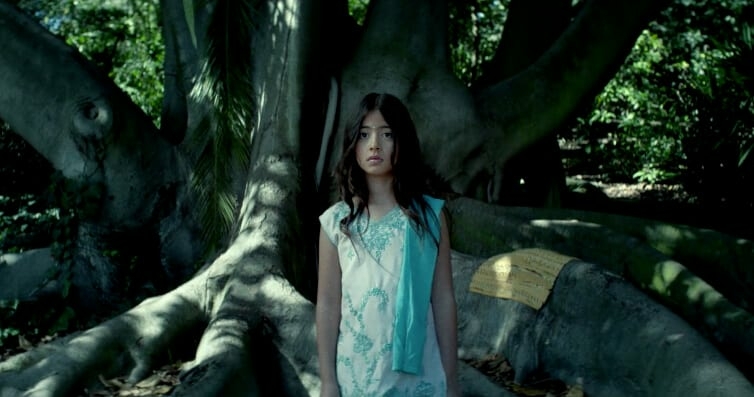 Raksha (protection) is a 19:55 minutes long film directed by Meredith Koch that has not only bagged the ‘Best Short Film’ award at the Delhi International Film Festival but also been officially selected to several other competitions.

It opens to wide-angle shots offering the panoramic view of the woods that remain the guardians of an ancient practice of foretelling. Shilpa (Sharmila Devar) meets a priest almost stealthily with her two young daughters who remain largely unaware whilst playfully accompanying her. The priest (Pramode Kumar) makes the foreboding revelation! While the younger daughter (Priya, played by Vanessa Patel) has managed to escape it, the elder one (Archana, played by Nitya Vidyasagar) hasn’t been so fortunate. It’s the curse of the stars, he declares emphatically! As if the setting alone wasn’t enough, Koch juxtaposes the frames with the close-up shots of the girls. Their innocence well captured by Nathan Mielke’s astute cinematography, the narrative is maintained deliberately slow in an effort to set the tone of the film.

Koch spends less time analyzing or even explaining the consequences of being a Manglik (someone with Mars in their horoscope that deems them unfortunate), instead focusing on the psyche of the concerned individual, here, Archana. Mangliks being unrightfully considered dangerous and hapless to other people, the film focuses instead on how harmful anyone becomes to themselves if subjected to such abhorrent and senseless superstitions.

Koch shows the unchaperoned situations the protagonist faces at times. Vidhya Iyer & Jhanvi Motla’s co-writing incorporates some very interesting scenes to make the movie dramatic. For instance, the sober, even forlorn vision of Archana chanting mantras all by herself, whilst her family regales in one another’s company across the dinner table or the chest drawer that bears the brunt of her frustration are very cleverly written.

The entire cast has done a commendable job portraying an Indian-American family that is miles away from their home country, but certainly not in their mind or thinking. The screenplay is particularly interesting as it constantly nudges the audience to think beyond the performances. It makes one wonder at where the narrative is going and if it’s in favour or against the happenings. Edited by David Kabisch the film injects the analepsis and prolepsis very deftly. The pace is well maintained, although towards the end it seems rushed. The scenes in the departmental store somehow seem an odd place for the unravelling of Archana, however, it turns to set in stone the prophecy made.

Michael Tavera’s music helps escalate the dramatization but could have been explored to its full potential. The lighting used is very effective adding intensity to the scenes. The locations used seem authentic and the performances realistic. What starts off as a story in the grey veers towards an end that leaves no doubt in the minds of its viewers. The curse of having the God of War (Mars) in one’s horoscope is certainly formidable.