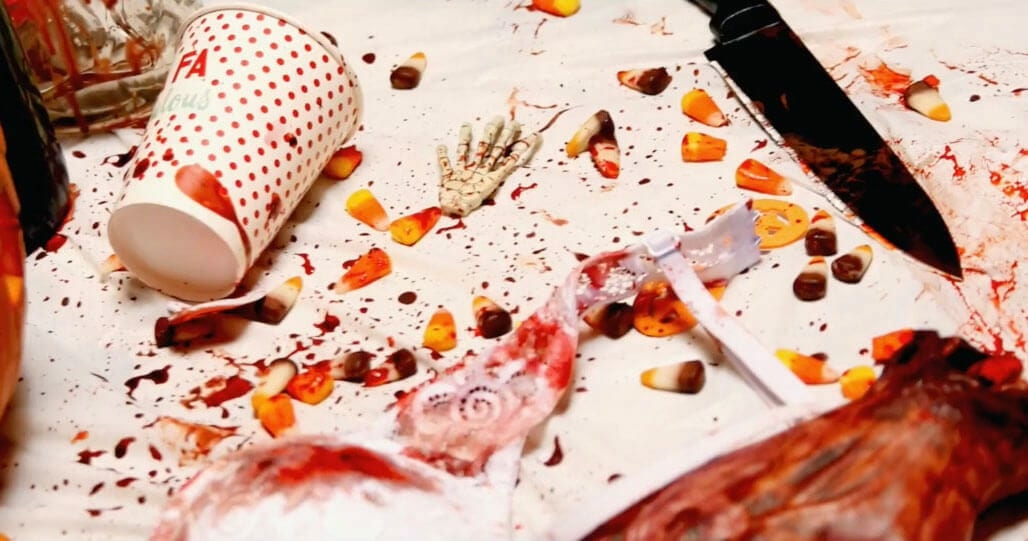 It is the night of 31st October. The year is 1995. Ben Davister (Sean Gloria) is in the dark, carving a pumpkin into jack-o’-lantern. He is setting the table for his guests. His calm ritual as it appears is disrupted with a doorbell and he opens to find children greeting him for Halloween. Ben Davister, a local hero and firefighter, much loved and respected, gleefully hands them out candies. By now it’s established, Ben is going to remain the focal point of the narrative. The second doorbell however brings the thrill. As he unbolts the door, we see a listless woman, bloody.

On the Halloween Day, evil spirits descend to earth; ghosts of the dead return & people try to ward them off by wearing masks & ghostly attires. But, what of those who wear masks even otherwise? Preparing the feast, getting dressed up and trick-or-treating may excite any person but Thomas Crane’s Ben. As the director, editor and writer of the film, Crane gives such a twist to an as-it-is spooky celebration, that perhaps Halloween will never feel the same!

The film slowly navigates through its monotonous conversations between the two, with Ben playing both; the host and the suspicious. Lighting is deliberately kept low with moments of monochrome shades to add to the eeriness. When two rookies enter Ben’s house to inquire about some incident, the film nearly explodes in an anxious climax. The background score given by Frederic Bernard engages the audience with its percussive beats and enhances the dramatization as one begins to smell the rat. The placement of certain props, some might find, as a forceful attempt to scare the audience.

However, Gloria is particularly good. His charming looks and affable disposition suit the character well. The character arch is well defined, although some would say predictably so. The make-up by Coutney Michaelis and Ilyn Nathaniel aids in bringing the forlorn and spooky look to the composition of scenes. And, Crane manages to cover every nook and cranny within his sweeping frames. The premise of the story, however, could have been truncated from 37 minutes 33 seconds long, for an even better impact.