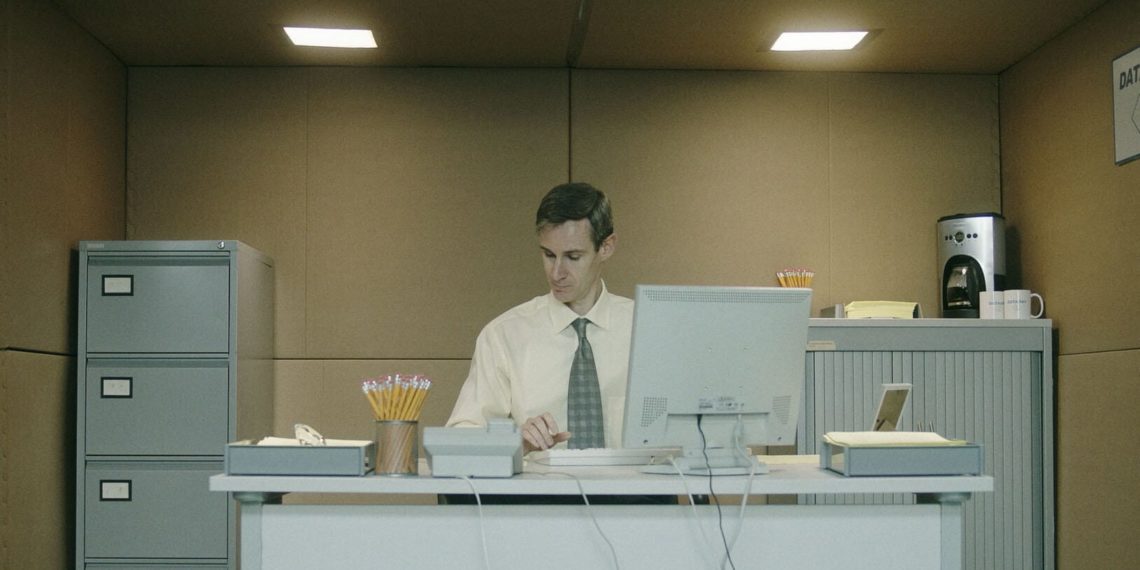 The film opens to Thomas Bell’s exquisite, soulful composition; accompanied by the tardy clicking of the keyboard. It’s James Killeen, the ‘Office Man’. We see him comfortably seated in his chair, punching in figures of a ‘Job Satisfaction Survey’ conducted. His face, a picture of indignant satisfaction, a smile that’s worn only by those who know they’ve earned it. It’s a typical day in his office, Dataday.

Mario Genovese’s camera captures images of Killeen going about his day. Languid shots of his desk, the corner he walks to during his break are incorporated. It’s deliberate, the paucity of the frames, the editing by Phil Dunn that gives time to let each scene sink in. We spend a good 35 seconds simply looking at Killeen’s desk. The meticulous arrangement, the movement of his fingers, the stress ball he uses, and the inspiring quotes he occasionally looks to for motivation, give the sense of him, the Office Man. We wonder how someone can be so content; we are convinced someone can be so content. That’s the sheer brilliance of director Phil Dunn, who in 09:21 minutes of runtime manages to punch in a compelling narrative sans any dialogues.

The film explores the professional life of the ‘Office Man’. We are shown nothing more of him except for the odd photo on his desk that hints at a family life. We see his life through the prism of the lens that confines it into a box, perhaps, what every office cubicle feels like. Killeen is so convincing as the Office Man, that it’s hard to see him as any other. His mannerisms, the body language, the multitude of expressions he brings to his character as the film progresses are simply outstanding, to say the least.

To have a film in a very primitive setting, to flesh the narrative with no dialogues to support it and to have a singular character as the soul of the cast requires skilful execution and expertise in one’s craft to make it a success. ‘Box Office Smash’ has it all. Be it Killeen’s acting or Dunn’s direction & editing, or Bell’s keen fusing of his composition to the pace of the film, ‘Box Office Smash’ is a stellar work of art meets filmmaking. The final shot (without giving away spoilers), with its wide angles and panoramic frames, is such an attention grabber, that your unpreparedness will make it even more poignant. As if on cue, the film compels you into thinking of the noughties, the economic meltdown and its inevitable consequences. It makes you comfortable, while still questioning your comfort. That’s the beauty of ‘Box Office Smash’, it’s edgy, but its narration isn’t.