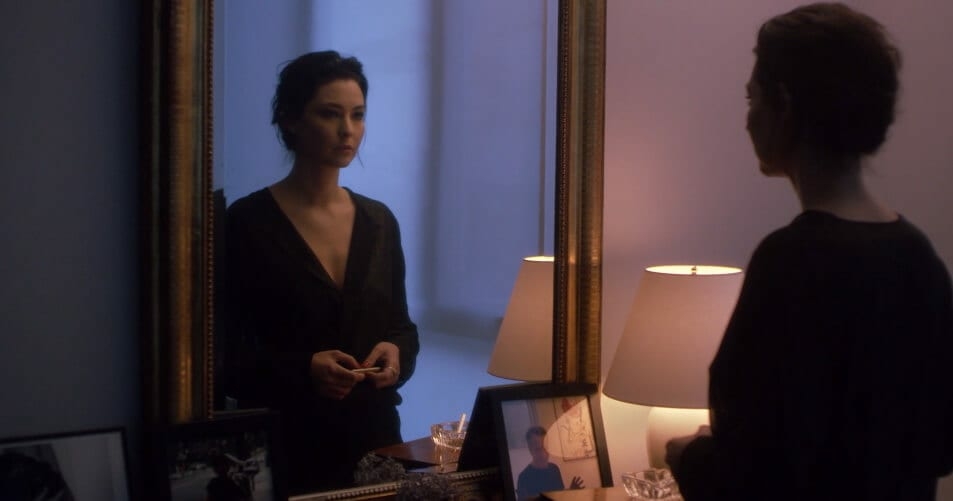 We hear the thunderous applause and the acceptance speech of the winner. The voice belongs to a self-deprecating & a witty woman. The words, however, seem rehearsed to the observant, but ring with a truth that’s thinly veiled. And then we see her. She is Stella Velon, the woman who plays the actress in ‘The Critic’. Also written & directed by her, the film is a 14:55 minutes spanning narration on an actress, the recipient of a prestigious award and her musings on herself and her choices.

Velon stares intently at the mirror. Her face riddled with thoughts that are hard to decipher. Akis Konstantakopoulos’s cinematography offers plenty of frames following her. We see her silhouettes, close-ups and visions of her standing, all by herself, captured intentionally in distant shots to show how small she is in the world she belongs. Velon’s direction is exceptional; she sets the premise without making it forced, the dialogues which would have otherwise seemed like a monologue are deftly sequenced into an interview. In fact, the entire storyline is truncated into an interview, with the questionnaire setting the pace to the narrative.

The interviewer played by Alan Smyth remains an unknown, enigmatic entity throughout. Remaining in the dark, he simply forms a silhouette with his gestures making for a vague representation of him. The only thing that stands out is his voice and its brilliant capacity to emote. Be it the smirk or the genuine surprise, the suspicion or the provocation; Smyth proves that one needn’t always be under the glare or even face the camera, pun intended, to establish their presence.

The interview starts off casually, predictably even. The answers, a mere extension to her acceptance speech, we are hoodwinked into believing it to be a replica of the innumerable chat shows we have come to see. But slowly the conversation steers into dangerously thin ice. It spirals from being inquisitive to accusing to inflicting and we wonder if it’s even an interview anymore. The questions are brutal, provoking & inciting while the answers although poised bear the hint of a defence. Eventually the façade cracks. The anger, that seething rage, the pure horror of being discovered for who you are and the ultimate act of escape; Velon outshines everything in the film! Her performance, be it her body language or the nuanced expressions or even something seemingly insignificant as the posture are so sharp that it’s hard not to be affected.

The music by Asaf Sagiv is befitting the film’s pace. The crescendo it achieves as the plot thickens is duly praiseworthy. And, Ivan Andrijanic’s editing is so neat that at no point do you lose interest in this gripping tale of confessions, redemptions and the slippery path in between the two.

‘The Critic’ remains Stella Velon’s show. From her writing & direction to acting, she has done it with such finesse, that it’s a pity that we can’t rate her any higher. At a time of #Metoo & #Timesup, ‘The Critic’ remains an honest dissection of what it takes to be a star and offers a peek-a-boo into that galaxy which we all find so alluring.

‘Son to Son’ Is About A Secret Waiting To Explode…