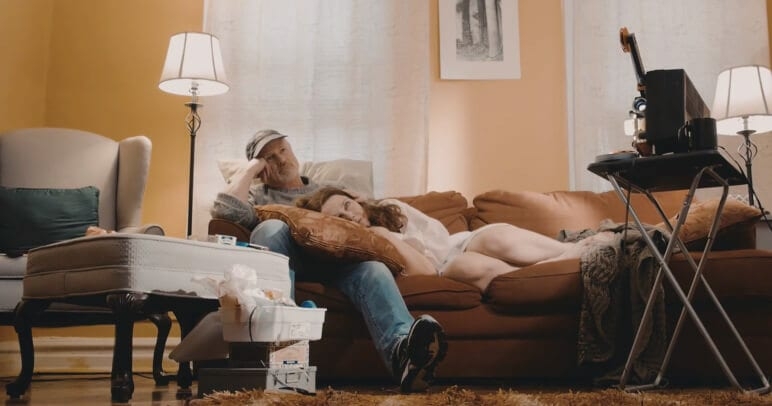 You hear the piano notes in the background and the click of the film projector that’s playing the sepia-toned images. Smiling people sharing the laughter; carefree moments captured for posterity; someone is clearly reliving their life. And then comes Danni onto the screen. Played by Jeana Reilly, Danni is the image of a woman stifled in her own home. She is the vestige of a failed relationship, a recovering addict who is yet to meet her resolute. And, Reilly portrays her with such sensitive, careful interpretation, that Danni becomes the woman you know of. What makes this 24:37 minutes long film so exquisitely beautiful is the kind of narration used to tell a story that is common and yet unbeknownst to most!

Danni works at Bob’s Diner. Her fellow worker Missy (Brenda Crawley) is tired of covering for her. Her general lack of attentiveness, constant late coming are dead giveaways, but nothing prepares you for the turmoil she is living with. Director Peter Jensen skillfully breaks the monotony of characters like Danni by adding layers to her psyche. We see her being tormented by her own visions, to the point where we begin to wonder if it’s a figment of her imagination or indeed her reality. We see her torn between her own emotions and wonder at the motive or lack thereof at her choice in actions. For instance, her obvious affections for a regular customer Sheriff Mike (Don Draxler) are thwarted by her own rejections.

Written, also by Jeana Reilly (credited as Diane Reilly), the screenplay is a slow burner. It takes its time to prepare you for the character revelation. The pace of the film is maintained steady with Sainte Howard’s editing and the music score by David Grossman & Anthony Krizan only plays ever so subtly in the background. What makes this movie compelling to watch is the genius ambiguity added to its narration by Jensen. We don’t get a sense of Danni until the very last shot. She remains a mysterious entity, perhaps because she herself is in need of answers. Without giving away the plot, the revelation of what she is addicted to and what it brings her to, towards the end, as an audience you’ll remain invested in her. Jensen doesn’t give you a warning of where the plot heads to and Reilly, with her stellar performance, makes Danni so believable that it’s almost like peeping into the living room of another human being. She lets her eyes do the talking. Be it the disbelief, the absolute state of numbness, the longing and the painful separation of her desires from her reality, Reilly is simply masterful.

When John (John Moran) re-enters her life, you finally see the reason for Danni’s being the way she is. The character arch is so well explored that despite them being unlikeable, they’re relatable. Addiction has found several voices in both reel and real life. But, director Jensen and writer/actor Reilly, by using ‘love’ as a form of addiction, bring a subtle, poignant and nuanced take to the damages addiction can have to one’s life, even if it’s something as glorious as love.