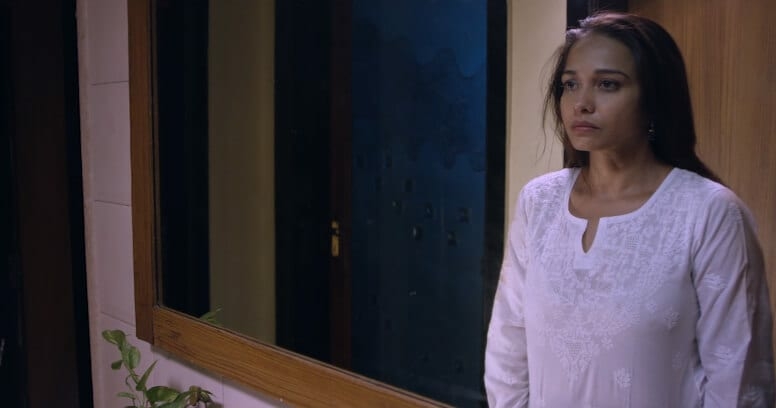 On a deserted road, an injured woman lies. A biker passes by unaware of her predicament. The man breathing heavily next to her ensures it, by stifling her, lest she makes any noise. And, we see Arjun Shrivastav for the first time and his disturbing gaze doesn’t go unnoticed. Co-directed & written by Rahul Nath & Kshitij Salve, ‘Stronger’ is a 19:59 minutes long film on the male protagonist, played by Shrivastav and the women in his life.

He has a girlfriend, (played by Sahana Vasudevan), sincere, loving and concerned. His inability to perform on the bed is confirmed in her consoling of him over his failure and suggestion of visiting a physician. He, on the other hand, is troubled and needs help, in more than one department. As we witness the intimate moment between the partners we see what’s running on his mind in very clear actions and we are made privy to the fact that he is no simpleton as he projects outwardly.

Edited by Munishwer Rao, the film is engaging in its pace right from the first frame. The narrative gives enough screen time to Shrivastav to showcase his acting skills. From his trembling body frame to the beads of sweat trickling down his forehead; his foot shaking spree and suspicious body language, there’s no stone left unturned to let the audience know that he is a man on the prowl. The women in his life, on the other hand, are hapless, by the simple virtue of being in his life.

The film uses the reverse technique, whereby as an audience you wonder who the real victim is and who amongst them needs the help. As Shrivastav starts acting on his fantasies and twisted desires, you see how the women in his life have to pay a price. When Richa Meena decides to stay separate from her parents to discover what she is made of, little does she realize that a random stranger in Shrivastav will show it to her in the most shocking and unexpected manner.

Yuvraj Jadeja’s cinematography captures the unsuspecting alleys of the Film City in Bombay in the most compelling manner. He lets his frame consume the characters and surroundings to one holistic, living, breathing entity. And, Lai’s music is telling. It not only carries the narrative forward but works in totem to the characters. When the violin strings are pulled, you sense the itch creeping in the character; when the piano notes are hit; you feel the numbing pain of the woman. The music simply lets the film be, without damaging its intent.

Rahul Nath & Kshitij Salve’s ‘Stronger’ is worth the watch, for its characters and narration. True strength doesn’t always come in the knight in shining armour; sometimes it is forged silently in the dark, deserted alleys of a world where the victim and the perpetrator cohabit.