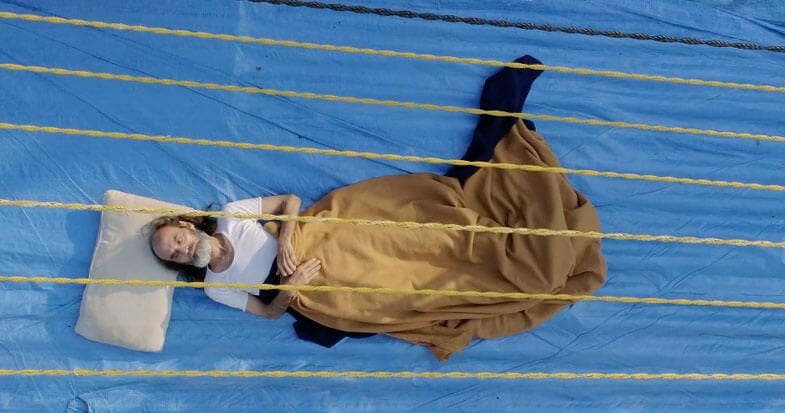 The film opens to an aerial shot that captures the dichotomy of a suburban life. On one side, edifices stand tall with hills at the backdrop and on the other, shanties fill the vast expanse. Drone operator Abhishek Parui ensures that we sense the duality of human life with the very first scene. The camera then pans slowly to our protagonist. He is sleeping on the rooftop of one such shack. In this isolated frame, it seems as if the entire world is his oyster. Ashish Choudhary’s ‘Kathi Pe Ghoda’ at 14:59 minutes’ in duration centers on this soul played by Ekhlas Khan.

Khan is frail and listless. His gait embodies a man who has lived, lost and is perhaps in search of an absolution. He comes across a ‘horse on a wooden frame’, (the literal translation of the film’s title) and picks up this peculiar, but seemingly random item. Kavish Agrawal’s cinematography follows him like the eyes of his audience would, at times languid, at times hurried. We follow his cycle until it meets a scrap dealer, we see him accept money for an item that has left us intriguing. We see him ask for directions for a potential job and land up in a place that sets the premise to the storyline.

Ashish Choudhary’s writing isn’t for the featherheads. It’s deep, engaging and thought-provoking. When Khan approaches the dilapidated building to meet his prospective employer, we are ushered into a dimly lit, faintly reminiscent of an art gallery-ish location. The place is riddled with hints and symbols for what is set to come, but nothing really prepares one for the onslaught of time voyage that Choudhary has in store. When Khan volunteers to work in housekeeping, he is guided into a room that is in a desperate need for cleaning. From the moment he enters the room, the story changes its course of narration, and in comes segments of time travel and metaphysical journeys pressing for answers to some of man’s most poignant questions.

As Khan is confronted with his former lives, we are consumed in the period with him, with his mistakes and agonizing misdeeds. We wonder just like him if he would have lived it any other way? The movie thereafter progressively deals with Khan and his life, taking into account all his misdemeanours and we see him regress in time and mind. The younger selves played by Mrinal Dutt & Arambh Trehan, we question Khan’s choices and reflect on his actions, until it hits upon us to remember that those were choices made by an individual who didn’t know any better than we did. The entire cast does a stupendous job at bringing to life their characters, be it Sushmita Bera who plays the prostitute or Laxman, the scrap dealer or Susheel Parashar, the kingpin of this drama.

Mannan Munjal’s music is hypnotic, transporting you into another time, gently cajoling you to join in the frenzy. It beautifully carries the narrative forward, without being overly pushing. Editors Srajan Agadi & Aryan Acharya ensure the pace of the film remains steady for you to invest in emotionally and mentally. ‘Kathi Pe Ghoda’ has some unusual shots in terms of novel experimentation; the 360-degree revolution shot being the highlight.

What stands out in ‘Kathi Pe Ghoda’ is the story, the underlining narrative that is too complex to be truncated into minutes of screentime. But to Choudhary’s credit, he certainly does come close to it. Contrary to films in this genre that promises to give you answers, Choudhary’s leaves you with more questions, as it should be. You wonder at the significance of those linearly aligned doors, or the graffiti with slogans sprayed across the walls, or the horse bound to its frames. They all carry a meaning and the beauty of the film stays in allowing you to interpret it in as many ways as you’d choose to.