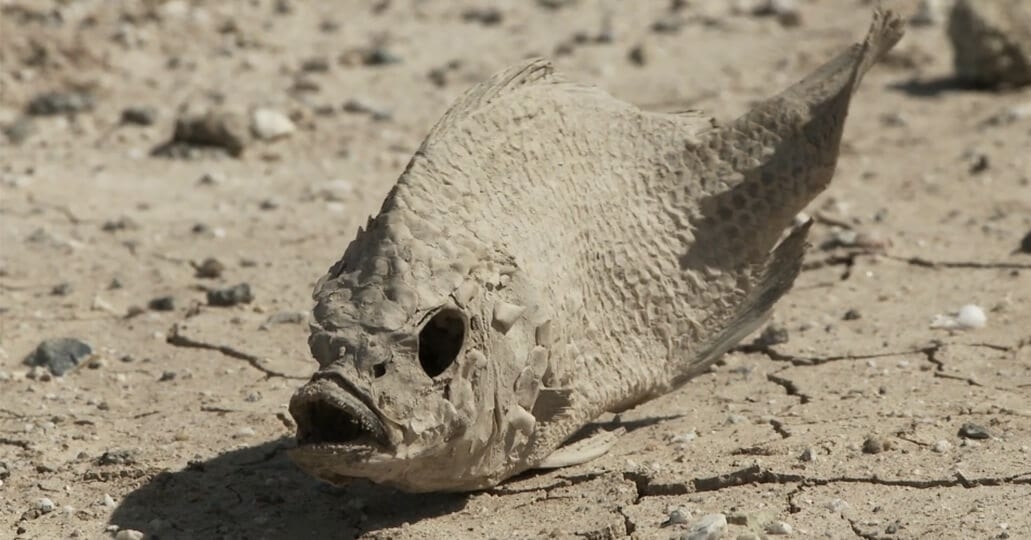 This 12:22 minutes’ long film opens to a grainy advertorial video of the 385 square miles of Salton Sea in California that is open to investments, circa 1950s’. The place resembles heaven, offering a piece of its newly discovered status to anyone interested in ‘owning’ a slice for themselves. Quickly cut to modern times, director Stacey Stone gives you a slice of reality!

The once coveted sandy shores and blue waters have been traded with indifference and apathy for toxic waste and mutated organisms. What once made the Salton Sea (Colorado River) is now shrinking into a deathly existence. The deserted shores, a distant memory of the laughter that once rang in there; Salton Sea is the paradise lost. We are brought to Imperial Valley in California, some 60 miles from the Mexican border and the visuals assault us of the reality that has come to become normal there. What should have been a playground for the children has become a graveyard for the fishes and birds. What should have been a breath of fresh air has become toxic enough to make its settlers abandon their homes and leave. What has come to become of the Salton Sea is a direct reflection of unrestrained, selfish and apathy-ridden human activities.

When Executive Producer Diane Mellen learnt that it’s the runoff sewage that is causing DNA mutations in these organisms, the director-producer duo (Stacey Stone & Diane Mellen) decided to do their bit. With haunting shots of infinite landscapes and aerial shots (Drone operator Kevin DeSHA) of a place that resembles a ghost town, the duo drives home the point. The Salton Sea was formed by accident, but it certainly wasn’t lost by accident. To top it, the government turning a blind eye to an existing problem is all the more defying to the cries coming from this place.

It’s difficult to make a documentary that isn’t overly educational or worse still, preachy. Stone seems to have cracked the code, however. By smartly letting a child (Mia Davies) be your sole companion on this journey as a narrator, she immediately makes you aware of the urgency of the situation. By capturing the emptiness of the land in her frames, she proves her prowess as both, the director and cinematographer of the film. She lets the vastness and the forlornness of the land speak to you directly. With music being sparingly used; it’s the muffled sounds of the waves, the fluttering of the birds in an abandoned house and buzzing of flies over a carcass that gives you the feel of an everyday life in this long lost heaven.

What the film lacks in terms of information, Stone more than compensates it with her languid shots and frames filled with the vacant shacks and abandoned shores. The last scene, in particular, is impactful when the present and the past are merged to show of what has come to become of what once was.

This is certainly a powerful film, with perhaps added information or statistics, it would have been even more impactful.

‘Lady’ Is The Wittiest Lesson Available On The Trajectory Of Feminism!

‘Stormtroopers’ Is A Deserving Ode To Star Wars!

‘Stormtroopers’ Is A Deserving Ode To Star Wars!