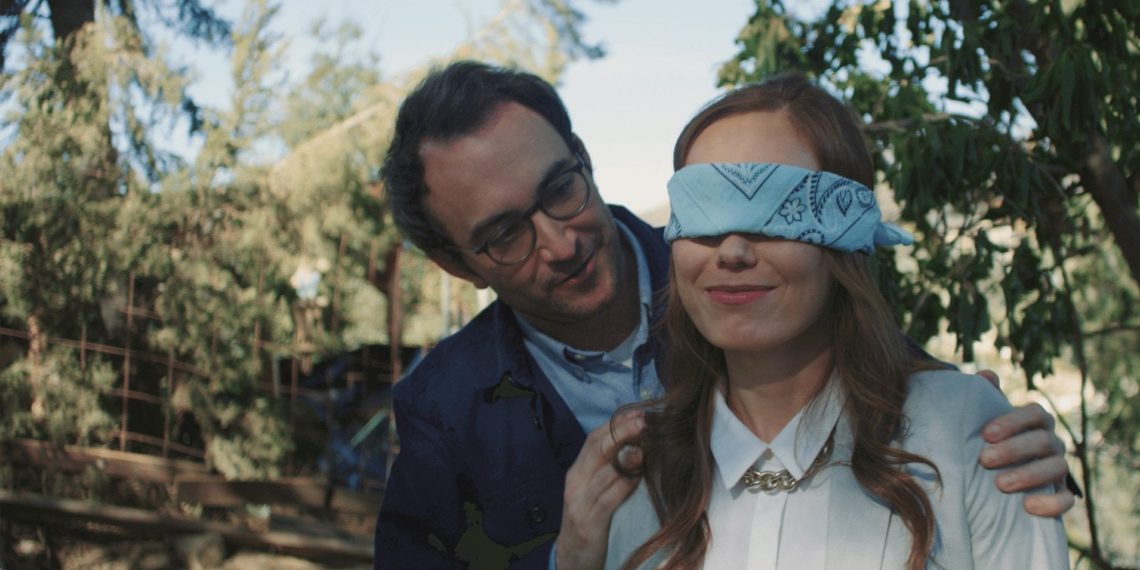 In the wake of the #MeToo movement comes a film that very unsuspectingly plunges you into a man’s comeuppance with his past deeds. Directed by Ryan Oksenberg, ‘Damage Control’ follows Drew (Clayton Farris) who very excitedly brings his fiancée Alison (Heather Geisler) to his inherited property. Away from the hustle of the city, it has a feel of abandon to it. With plans of turning it into their future home, the couple set about exploring it. It is this very house that lays the premise of the film.

Written by Matthew Wygodny, ‘Damage Control’ is an unsettling tale of retribution, justice and simply put, how karma never forgets an address. When Drew & Alison take a tour of their future home, they both feel differently towards it. While Drew remains excited at the future prospect, Alison is less than pleased. Little does Drew know that his happiness is going to be short-lived too. When a phone call takes Allison away, Drew is taken aback to find an intruder (Ana Zimhart) in his property. When he tries confronting her, the tables turn.

Wygodny’s writing is brilliant to say the least. As the conversation between Drew and the intruder turn from shocking to volatile, we hear Alison’s conversation with her colleague over the phone. Whilst both conversations are occurring simultaneously, they’re a world apart. But, Wygodny’s ingenious writing incorporates the storyline brilliantly into these moments. As the intruder begins cornering Drew, forcing him to remember his past, the viewer is taken aback at the turn of events. Alison and Drew’s worlds collide, and the dialogues get more and more unnerving until one final stroke which leaves the viewer too zapped to react. The casting needs a special mention, for had it not been for these actors, the characters may not have fleshed out so well.

The acting is good, especially of Clayton Farris. From turning into the panic-stricken man who has to face the judgment as his past catches up with him, Farris brings Drew to life. He suddenly becomes the face for all those culprits, predators and abusers who might have gotten away. Alexander Thomas’s music plays along the plot. With its rising crescendo, it adds volumes to the build-up of the plot.

What sets ‘Damage Control’ apart from the rest in this genre are the fact that it focuses on justice over reconciliation, retribution over forgiveness and absolution over resignation. Unlike most other films, ‘Damage Control’ stems from the abandon of a location. The story weaves itself around a place (Eagle Rock, California, USA) than the other way around; and Andy Chinn’s cinematography captures the haunting, eerie sense of a deserted place well. Oksenberg who has also edited the film helps maintain the pace and clarity whilst the shots constantly shuttle between outdoors and indoors.

‘Damage Control’ is disturbing, provoking, but deeply satisfying. With its surprising narrative, phenomenal direction and acting, it manages to create a soul-stirring, thought-provoking story that will long outlive the #MeToo movement.