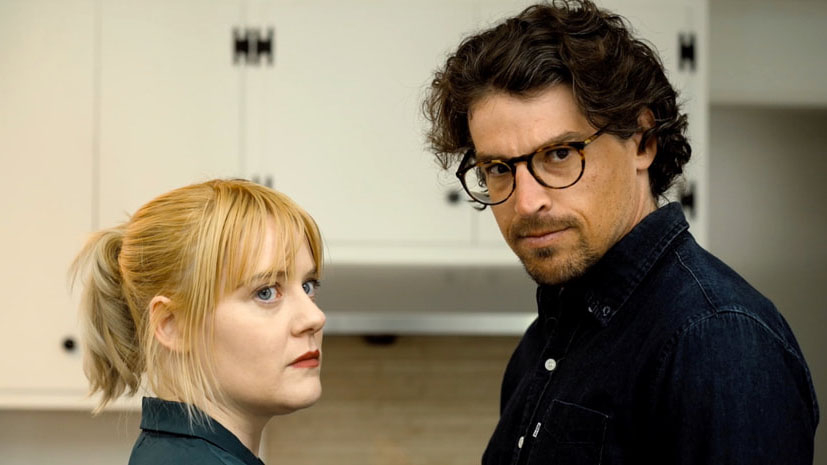 Vivian Kerr’s Julian is a short comedy whose protagonist is not only faced with the sister she has seen only thrice in ten years but also the sister’s fiance, a melon. The film uses this Lars and the Real Girl situation (and which the film directly references) to explore a sibling relationship that is mired in a history of bitterness.

Kerr plays Brynn, the sister hosting lunch with her husband for her sister, Marlow (Stephanie Drake). The film opens on a serious note, all closeups, fully immersed in Brynn’s stress. But the humorous tone kicks in soon after, separating the viewer from Brynn’s interior world and bringing them into her larger, physical world. Her husband (Max, played by Joel Kelly Dauten), unfamiliar with Marlow, is sceptical of Brynn’s reasons for her agitation. Both of these things—her feelings about Marlow and Max’s restraint—become cornerstones of the comedy. The latter is put to an unceasing test when Marlow arrives with her melon fiance, the titular Julian.

The uncertainty over Marlow’s intentions is contained within the presence of the melon itself. Marlow appears to be perfectly in love with it. The sister Brynn has dreaded and hated shows up after years, with seemingly none of her old self with her. If there is an appropriate reaction, Brynn has not arrived at it so far. Max is uniformly polite. The film keeps cutting between lunch and the hosts’ repeated meetings in the kitchen to debate the on-goings. The baffling nature of the situation generates its own humour, always appearing as though ready to unravel and show reason after all.

The climax epitomises this push and pull between the narrative and audience expectations when a ‘fatal’ accident befalls Julian. It is the closest Brynn has come since Marlow’s arrival to finding the truth behind the visit; as well as the first instance when Marlow shifts from being giddily in love. How well the sisters communicate may very well determine whether they will see each other again within the next ten years.

What makes Julian so entertaining is not merely the confounding nature of it all, but Brynn’s reaction to it. Instead of being validated in her dislike, Brynn is confronted with events that ask for her sympathy, and dare one say, best wishes. A tall order for anyone.