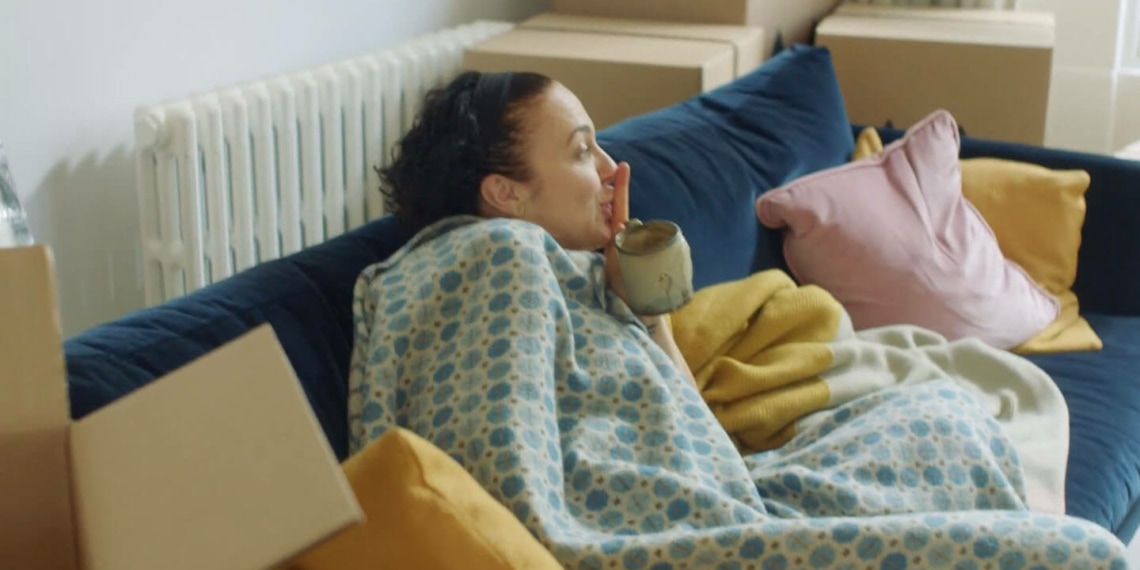 Writer-director Caroline Steinbeis’s debut From A Strange Land is wildly entertaining and contains greater depth than is apparent. The plot looks fairly simple: a neighbour brings the new family next door a welcome present only to walk in on a situation no one was prepared for. Naked neighbours, or indecorous neighbours? Which is worse?

This is a film whose narrative could inject energy into the dullest day. Rebecca Lloyd’s editing is fast-paced and dramatically comical. By juxtaposing the scene in the two households, Lloyd emphasizes tension and humour in a seemingly everyday scenario (and the subsequent awkward situation). We meet Margaret (Deborah Findlay), getting ready to go welcome her new neighbours—a young family of three—paying attention to the smallest details of her appearance as well as of the cake she has prepared for them. Disciplined, measured person. In contrast, her neighbours are the picture of chaotic merrymaking. The walk between Margaret’s house and theirs is marked by a keen tension, like a timer counting down the seconds to disaster.

All of them naked, the father (Matthew Needham) chasing their toddler across their littered living room, this is not a family expecting anyone, much less a stranger standing unannounced in the middle of their living room. Fully clothed and carefully groomed, she stands out uncomfortably. The silence is excruciating. The tension potent. It does indeed look like two worlds who have nothing in common collided. Margaret moves first, trying her best to smile through what certainly feels like physical pain, a scrambled heap of cake at her feet. Now if that isn’t comedy.

But Steinbeis does more. Even as the humour-filled disaster unfolds, the film readies its central question: how far is too far and what do you do when you get there? On the comic front, the film has you wondering how the two households will coexist hereon, if it will be like the pop culture’s spider that compels you to move countries. But if you are feeling philosophical, it also poses a deeper, more thoughtful question: How do you reckon with irreparable differences?