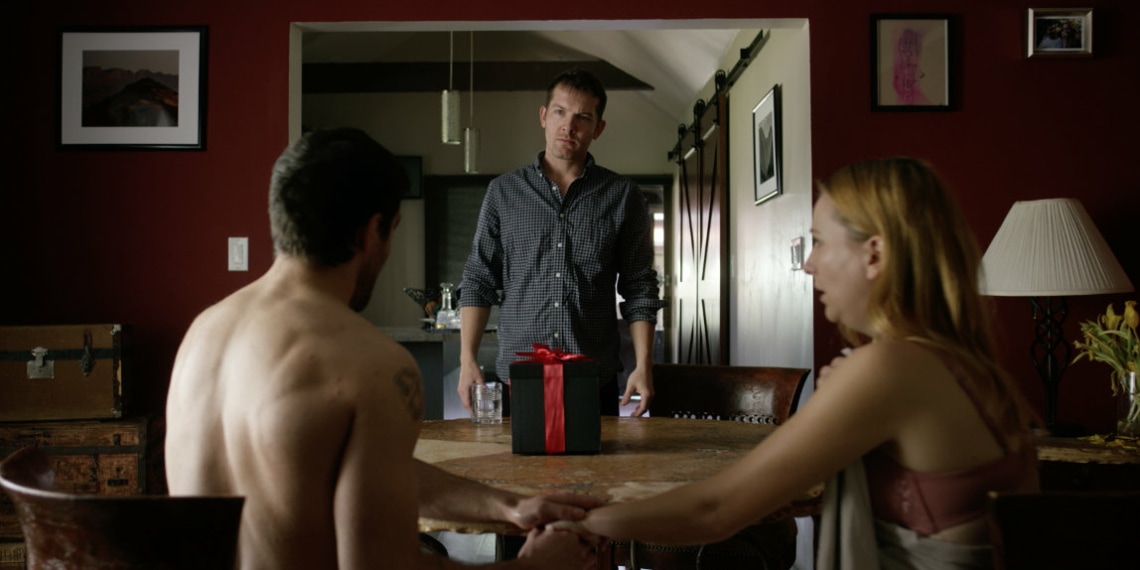 For a large chunk of its length, Joshua M.G. Thomas’s The End Of The World, written by Nabil Chowdhary, keeps its audience hooked on its sinister story, keeping them guessing as to its true form until well into the runtime.

It sets up its narrative excellently. Foregoing introductions, we are plopped right into the centre of a, particularly uncomfortable scene. A man walks into his living room to find another man holding the woman he woke up with at knife-point, claiming she’s his wife. It takes us some figuring out to understand that this is not the usual discovery of infidelity. Amy (Debby Gerber) and Michael (Costa Nicholas) are married, and have a son to boot, while the intruder (Adam Reeser) appears to be deranged in believing Amy is his wife. The film does eventually follow this thread, as we start off with derivative moments like What’s in the box? and tense dances to Davis’ The End Of The World (which the intruder claims to have written himself for Amy). The fear and suspense of each escalating step up is delivered with precision (credits to the editor), having a very Hollywood-esque style to it.

The situation reaches its tipping point when their son’s safety is threatened. The intruder taunts Michael with a bloodied t-shirt, all the more disturbing because it is still wet and the blood fresh. This is telling of the plot’s central conflict — it is a match between Michael and the man. Jack is a pawn, and for that matter, Amy a prize, relegated to trembling in the background.

The final resolution may disappoint some, but the film wins all the points for its cinematography, which translates the plot for the visual medium with beautiful finesse.

Overall, in an ironic way, The End Of The World is a film that upholds the value of a story’s journey, regardless of the destination. Must watch!

#ShortFilmReview: The End Of The World: A box, a bag and a wallet walked into someone else's house. Click To Tweet

Watch The End Of The World Short Film Trailer

The Sleepless: Kami Sadraei’s Twist On Facing Your Issues

The Sleepless: Kami Sadraei's Twist On Facing Your Issues