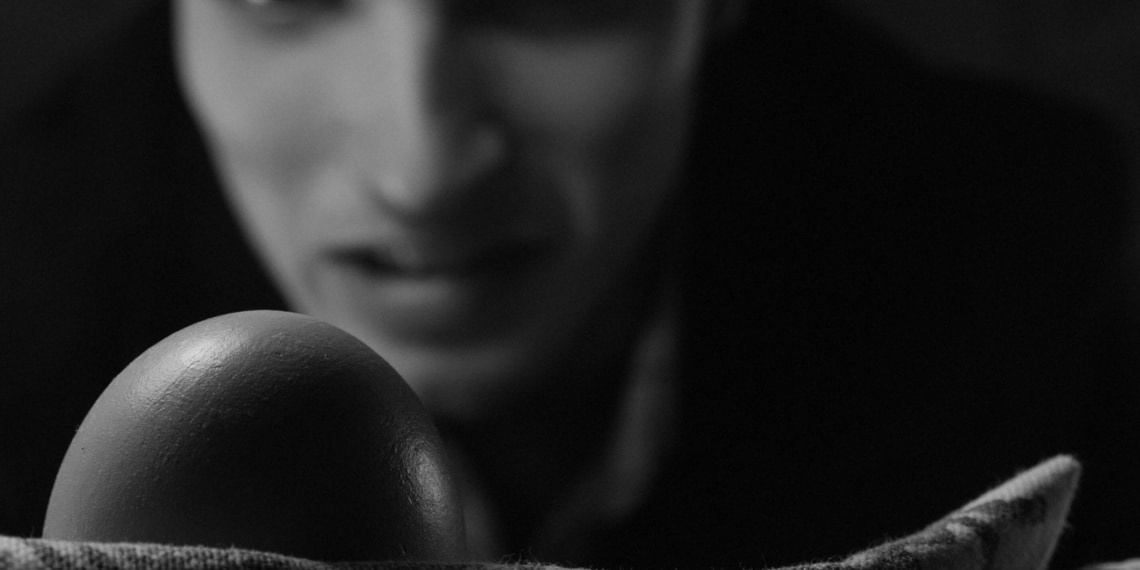 Too many films have explored grief and loss on screen. The suffering and the unbearable weight of it has been the staple script for many a film. It would take something beyond the ordinary to grab and sustain the viewer’s attention now in this sub-category. Sans dialogues and with minimal use of traditional storytelling techniques, Egg could be a laudable example of that. At 19:59 minutes it’s a short based on Lucas Fabbri’s story, and an interesting one at that, purely for its directorial choices.

The characters have no names; no voices either. Their shared stories, dynamics and histories are consciously left out. With very little to play with, directors Laurence Hills and Lucas Fabbri create a story that is absorbing purely because of the imagery, the props used and the wonderful dreamlike ambience it creates for its characters.

We don’t know his name, we barely hear him talk, and yet he fills our screens. Actor Kit Clarke, the main character of the film is pulled into the vortex of his own existence. Drowning in grief, shut from the world outside, his life is reduced to the bare minimum. His backstory is hinted at various points in the story — an ominous pendant, a room that remains locked and memories that keep cascading, both on to the screen and to the psyche.

When a passing bicyclist stops before the Brook House, all signs hint towards the ominous start of the film and the character’s journey. James Horton, whose composition plays along with the black-and-white setting of the film, helps give a voice to the characters. In their wordless existence, his music becomes the dialogue. To break the monotony of the monochrome, illustrations, grainy textured and sepia-toned frames are introduced, but only sparingly so, almost as if to show that the character’s life, like the screen, is devoid of any colours.

When the protagonist discovers an egg in the woods, the illustrations used are telling and smart too. A choice that is becoming more prominent in short films these days, the design and animation by Ruxandra Albulescu blends seamlessly into the narrative. Clarke, and Rosanna Adams, who plays the only female character in the film, are wonderful. Their chemistry is not really put to test as they hardly share any screen time together, but nonetheless, play off each other convincingly. It is Clarke who consumes the screen. His act, especially in the second half is riveting. The mad descent into misery and pain are spellbindingly portrayed and the trance-like performance is only befitting the narrative.

Egg is unique for several reasons, but perhaps most so for its imagery and Clarke’s performance. As the story goes back and forth, edging at the precipice of complete breakdown, one starts to wonder at the significance of the props used and the chance discovery made in the woods and just as one is about to put the picture together, the screen springs into colour as if by some miracle, the cloud of sorrow has disappeared.