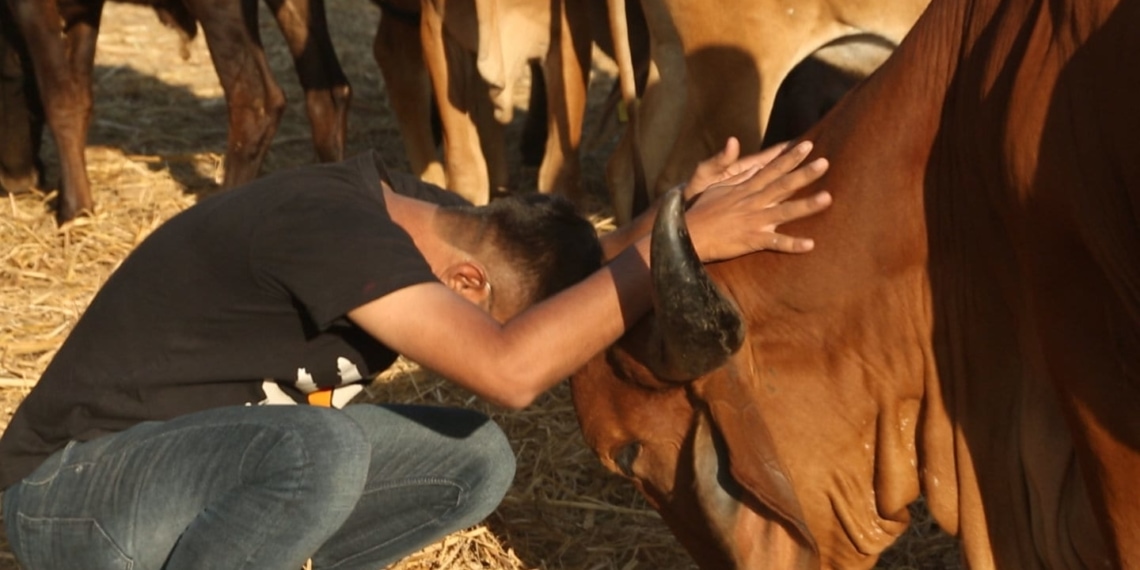 In a country raked with countless problems within its own borders, here comes another; a fairly recent one, that of cow vigilantism. Straight linked to the rise in the right-wing political party of the country, cow vigilantism has only found to be on the steady rise and director Maitreya Sanghvi’s Gau Premi: For The Love Of Cow explores the motive, modus operandi and outcome of one such group, based in Rajkot in Gujarat (India).

Right from its opening frame, the documentary is filled with tension. Each frame is held with such tautness that it quickly descends into a discomforting experience. The credit to this goes to multiple factors. The natural setting of the entire event being the night-time, being the primary one. As the cow vigilantes; here known as Gau Rakshaks, (which literally means a protector of the cows), prowl the streets, it is unmistakably predatory. The setting is well accentuated and explored in Pranav Gunturu and Roshini Shetty’s lensing. Capturing the eeriness of the deserted streets, the lonesome streetlights barely offering anything comforting, the scenes are gripping, to say the least. Add to that, the music playing in the background; with its forced jingoism in its lyrics, and the glorious ignorance exhibited by the characters in the frame, the sheer terror of what the night represents is palpable.

Documentaries aren’t scripted, can’t be scripted except maybe in having a thorough blueprint of what it intends to explore and highlight in the process of its own discovery. A very complex topic to have been condensed in mere 12:31-minutes, it would be fair to say that a lot is left in the periphery. The editing (Terence-Hari Fernandes and Nachiket Joshi) is spot-on, evenly paced and particularly commendable because it does not get carried away in the tide to dramatise the events, which would have been the norm otherwise.

The interviewers whom we never know of, except through their voices and the interviewees whose only identity remains that of a Gau Rakshak engage in a guerrilla-like act as they wait to ambush the ‘‘cow smugglers’’. The conversations at this point are simply put – incriminating. As it veers into the dangerous territory of unmasked hate, wherein one of the interviewees even interrupts to swerve a very telling slip-up, into smartly chosen words, the message isn’t lost. No effort has been made on either sides to sugarcoat the good, bad and the ugly, here. And, that’s why it is hard-hitting because one can sense the damage done. And, as an audience, there is little to sympathise these individuals, no matter how misplaced their own sense of understanding, ignorance or general lack of awareness to their actions.

It’s an interesting choice in the title, considering how far from love the theme and context of the film are, perhaps that is precisely the intent; to showcase the crime that’s meted out in the name of love. Gau Premi: For The Love Of Cow is deeply unsettling and affecting when seen through the lens of unlawful acts that citizens partake in with the limited understanding of their own rights, privileges and responsibilities.

Watch Gau Premi (For the Love of Cow) Documentary