Secret Men’s Business: Dirty Laundry Aired For All To See… And Enjoy? 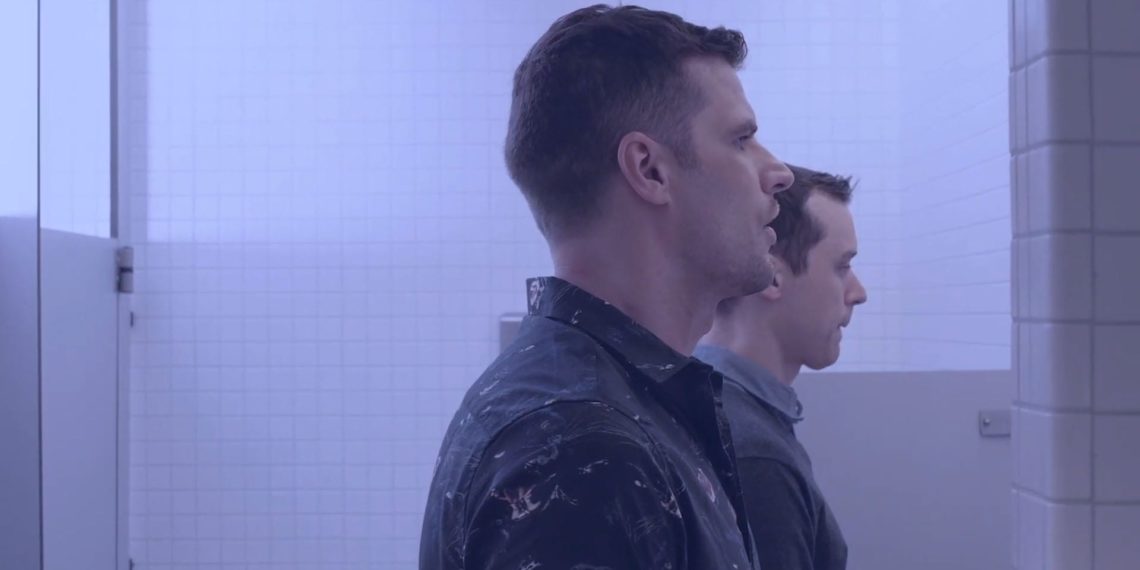 Ignorance would have proved blissful in this instance. David Coussins’ Secret Men’s Business, a film that is basically an 8-minute long dick appendage measuring contest, is unfunny and claws at the senses with serrated, blunt knives.

A man (Nick Erkelens) on a date with his girlfriend (Annapurna Sriram) serves as an uncomfortable witness to her enthusiastic chance reunion with an ex, Andy (played by Coussins himself), or as she calls him and he clearly prefers to be called, Andyconda. It does not take a sharp imagination to figure out the origin of that name. After Andy leaves, Adam (the boyfriend) makes a quick trip to the washroom, yet again running into Andy. Andy is both well-endowed and very obviously desperate for validation. Adam is far more reserved, but scarcely less terrified of having his masculinity questioned. Peeing turns into previously mentioned contest, and last no less than two whole minutes. One is urinated on by the other. Peeking and counter-peeking occur– in fact, begging to be peeked at is also a feature in this boring comedy. All these could have been worth many laughs in the right hands, but Coussins misses the mark by a wide shot. None of the characters has any depth or anything that makes them interesting. They are simply props in a plot-centric story with an underdeveloped, bland plot. Camerawork is unvaried but functional. Erkelens has the most range in his performance; Coussins is wooden.

If there is something to enjoy here, it is the sound design of the film, which turns up the discomfort with precision. A lot of peeing happens, some of it on again, off again. The sound design makes sure you are paying attention. When it is finally over, Andyconda leaves and Adam finally zips up to join his girlfriend. Enter her (equally enthusiastic) old friend from her college days: Carlalingus.