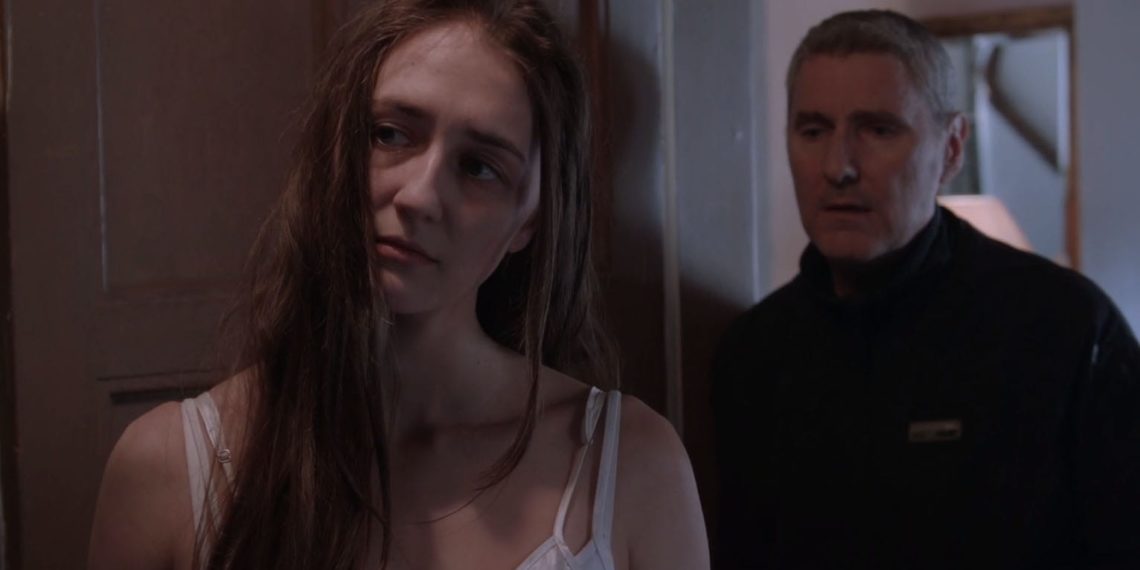 Safely to Shore is a long 31 minutes, ironically, for a film that tries to be so many things at once. Matthew R. Ford tries to weave in narratives about sexual, physical and mental abuse, self-harm and supernatural elements all together in this very confusing, and very dull plot.

Here’s what happens. During a walk in the woods, a man (Greg Hobbs) finds an unresponsive, chemise-clad young woman (Maya Szlachetko). In her hands is a strange glass object. Not knowing what else to do, he brings her home. Parallelly, another young woman (Sharni Tapako-Brown) routinely cuts herself. Her pimp (Andy Chaplin) turns up, orders her to get dressed. She meets her latest client (Chris McQuire) on the street. He uses her as a source of comfort and later convinces her to run away with him. Here, she kills her pimp. There, the other woman has a breakdown (with hints of supernatural influences). Their paths converge. Cinematography (Daniel Alexander) had so far been varyingly uninteresting or flawed; here it shines. Using the black background technique, the two characters are confronted with each other in a most striking manner. Although, when Szlachetko’s character delivers a monologue, it neither answers the plot’s dangling questions nor does it excite interest. The writing is meandering and rather full of redundancies, ultimately reducing the visual style to empty spectacle. Moving on, during the woman’s breakdown, something affected Hobbs’ character. He changes. More than the women’s paths had converged and it becomes a single nightmarish narrative. Most of which does not make sense. What does stand out is the lingering focus on the women suffering, like a spectacle. Not pleasant and neither logical from a story perspective.

Ford attempts to make the film a dark and compelling affair. Instead, it trips on its own convoluted threads and ends up being an overlong mess of suffer-porn. Abuse is only shown (a lot) and barely commented on, wasting its entire thematic premise. Performances, as is evident, are purposefully delivered one-tone. The plot on the other hand often loses tonal focus, sometimes even using music in the unlikeliest of places. Ultimately, the film concludes with more questions than answers, and perhaps one or two indignant viewers for the lost half-hour.

First Mistake: Chemistry So Good, You Don’t Need Conversation To Fall In Love