‘The Visit’ Is A Profoundly Tragic Narrative Of A Mind Lost… 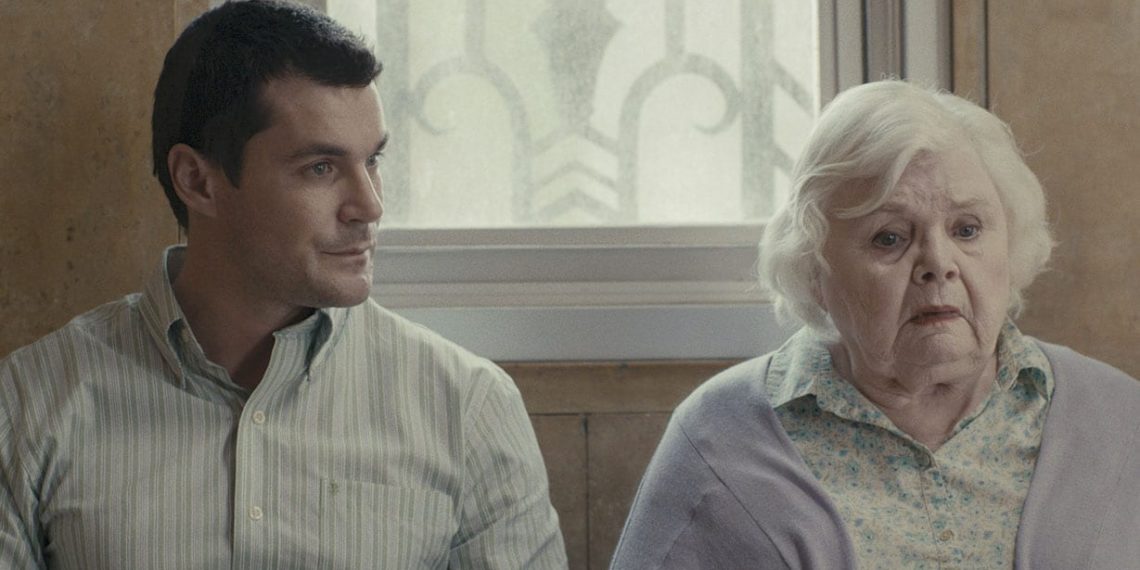 Winner of the ‘Best Shot’ at the ‘Burbank International Film Festival’ and ‘Catalina Film Festival’ amongst others, ‘The Visit’ in association with Sky Frame pictures, is written, directed and produced by Romina Schwedler. The very opening shot of the film bears with it an unmistakable psychological tenor to it. It is Tuesday, and as always, Ben (Sean Maher) is there at the hospital to meet his mum. And, although it’s usually the Sundays that the mother-son duo meets, this time it’s changed and one wonders at the reason behind it as much as Ben!

The premise of the film centres on where Ben’s mother, Mrs Perkins (June Squibb) is admitted. Perhaps, its dementia, perhaps just a hospice for the aged, we can’t be sure. Ben tries to hold a normal conversation with an increasingly adamant and difficult Mrs Perkins. And, as an audience, we are sold by it too. With the entire film shot in the hospital, the location certainly carried with it the weight of the story, however, it is Schwedler’s skilled handling of the film with its minimalistic tone and well-sequenced dialogues that makes the film hard-hitting in its 12:30 minutes of duration.

Cinematographer Alan J. Carmona played on the additional lighting cleverly, giving a beautiful mix of cold and warm hues to the film, each foreclosing the coming event; a subtle ode to genius filmmaking. Carmona keeps a shallow depth of field maintaining the characters in sharp focus, thus making each frame an unmissable scene.

Academy Award nominee June Squibb and Sean Maher (‘Firefly’ fame) play their characters to top notch perfection. It feels so real, that it would hardly be a surprise if they were indeed mother and son in real life too! This performance of theirs is no exception and may account to several nominations and wins this time around too!

Without giving away any spoilers, the last scene is absolutely heartbreaking as new visitors join in to see Mrs Perkins and we begin to wonder who really is the patient as the tables turn and conversations ebb between the present and the past and a terrible, terrible tragedy is revealed. Schwedler shows no mercy. Giving no clues to where the narrative is likely to head when the final revelation is made, it is as perplexing and hard hitting for us as it is for Ben; for all is not as it seems!

Dan Zlotnik’s music is an absolute marvel, light on the ears and fitting in the narrative. Never coming in the way, it simply plays along adding the necessary touch, wherever required. Schwedler who has also handled the editing of the film deserves a special mention for the adroitness with which the scenes are so effortlessly sequenced making the viewing so much more pleasurable.

‘The Visit’ is moving and sad, but above all, it shows the tenacity of the human mind to hold on to its beliefs, no matter how self-harming and hurtful it might be…

'The Visit' Is A Profoundly Tragic Narrative Of A Mind Lost...

'The Pond' Is A Horrifying Portrayal Of A Man Being Trapped!