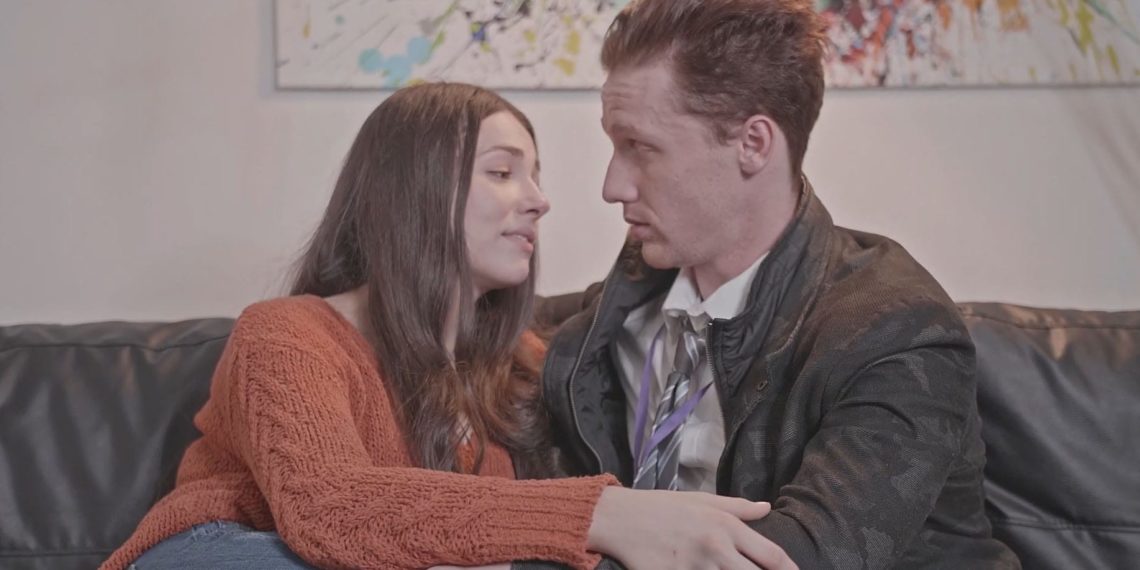 “I walked far away from the shackles of my dark past, only to be with you; but I could never outrun my past, could I?”

If this statement doesn’t summarize the film, then nothing ever will. ‘Old Ties’ is a 18:05 minutes long film by writer-director-producer Omeed Farzin, on the life of a young man, Steve (Chris O’Mara) whose recently reclaimed life is on the precipice of another debacle.

The opening shot of Nadia Milliken as Emma; singing and playing the guitar, waiting for her love to return home sets the theme of the film. Farzin with his very first scene draws the outline for his audience. Milliken who also enjoys the credit for the song ‘Cry to me’ is impactful despite her limited screen time. Her shared scenes with Steve form the crux of the story as they draw a picture of a merrily in love couple. Farzin uses their scenes to give a bow peep into Steve’s life. The hint of his struggle at his new job not only shows the genuine concern and love Emma has for him, but also the past that is refusing to let go of him. As if that alone wasn’t challenging enough for Steve; enters Maxi played by Anton Reilly, an age-old friend, who hasn’t managed to enter Emma’s good books yet.

Maxi’s run into Steve’s life isn’t without purpose and it doesn’t take long for Emma’s scepticism to be validated. Cinematographer/editor Nikolai Garabedian plays around with the frames here, alternating between close-up shots and low camera angles to draw the audience into Steve’s old life. And, we see him spiral back into where he came from. The close-up shots do justice to the hysteria and frenzy that Steve experiences and his uncontrolled emotions are highlighted against the setting of the key, fill and backlighting used which gives a warm and a dark undertone to the scenes.

The high-pitch bass background score used along with the rock and percussion effects elevates the scenes to a much higher level.  Music Technician work is the outshining element of this movie. The sound effects sets the mood of the narration. ‘Gunshot’ by E.P.O and ‘Delta’ by Jurgaz leaves an indelible impression on the viewer’s mind. Without giving away any spoilers, as Steve and Maxi begin to jointly venture back to their good old days of being junkies, there is a part in you that hopes for Emma’s sake, this to be a dream.

In totality, ‘Old Ties’ is a team effort. O’Mara justifies each and every dialogue. And, Anton as Maxi brings in the necessary punch to the narrative. The trajectory of the film, though predictable, you hope against hope for all the characters’ sake that it doesn’t pan out as you expect it to. ‘Old Ties’ offers a learning curve to all those willing to take a closer look at the effects of addiction and the repercussions it hands in, to its victims. It’s a film on relationships, losses and repentance; all seen through the eyes of one man and his choices…

#ShortFilmReview: He took all this time to walk away, only to return to his 'Old Ties'… Click To Tweet

Oksana Mirzoyan Retells and Makes A Work Of Art With 'Susanna'