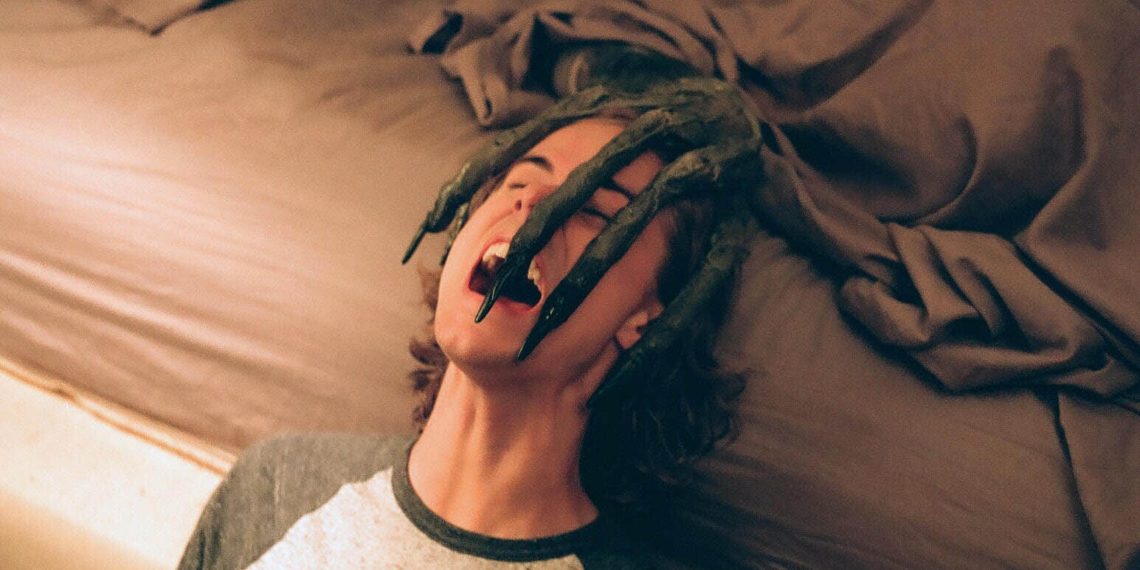 Generally, filmmakers try to reformulate the tried and tested of the horror genre to come up with something new. But, with ‘Vexed’, the stakes are raised much higher. It regurgitates the usual, but with a heady mix of horror drama and modern-day gothic horror garnished with a pinch of mystery. Writer Baker Chase Powell knows the pulse of his audiences well. He breaks the monotony of the stereotypical views thrown towards horror. Spirits, ghosts and some supernatural occult are no more the driving forces for his classification of the genre. Instead, he delves deep into the audience’s psyche and indulges them in it.

Enwrapped in the variance of lighting techniques from edge to spotlighting to underexposure cinematographer (Mark Cartwright) captures the evolving night of a couple’s harmless TV viewing into something macabre. The narration is fast paced, opening with the establishment of the location in a rather ingenious way. Overlaid with some intense dialogues and a background score that works slowly around to create the ambience for the story, the film is set to spook its viewers. What’s particularly interesting is that, be it the cinematography or the storyline, the direction or the plot twists; they are kept so malleable that at every stage a new surprise is spun around, making it unpredictable and hence a thorough meal for an adrenaline junkie.

Leah (Nosheen Phoenix) and Nick (Baker Chase Powell), the main leads are in the midst of watching a slasher horror. Just to mention: Nick isn’t a fan of the slashers; in fact of any horror flicks! Preferring comedy to horror, Nick engages Leah in a brief challenge to pick the better of the two, but then quickly gives up to go off to sleep. However, it doesn’t take long for them to realize that the events of the night are far from ideal. Just as you think you’d have figured out the story, Cartwright pulls out a number from his genius hat.

In just a duration of 13:00 minutes, the film manages to chill your bones more than any regular feature length. Phoenix and Powell as Leah and Nick are commendable in their characterizations, offering an earnest, relatable sense of performance.

Cartwright played with his camera brilliantly. In midst of the close-ups and medium camera angles and dolly in, he subtly introduces the dutch-tilt camera movement. Shots of Nick walking towards the kitchen; the interplay of the spotlight and the dutch-tilt gives the audience the right dose of shock and imminent danger. This simply supports how adroitly he played with the props and why he deserves the ‘Kudos to director award’ at Holly International Film Festival Award and ‘Award of Excellence’ at Southern Shorts Awards (2017).

‘Vexed’ isn’t meant for the faint-hearted. But, it certainly is meant for all those who want to burst the bubble that horror films don’t scare anymore!