‘Positive Action’ Plunges You Into The Zombie Inflicted World… 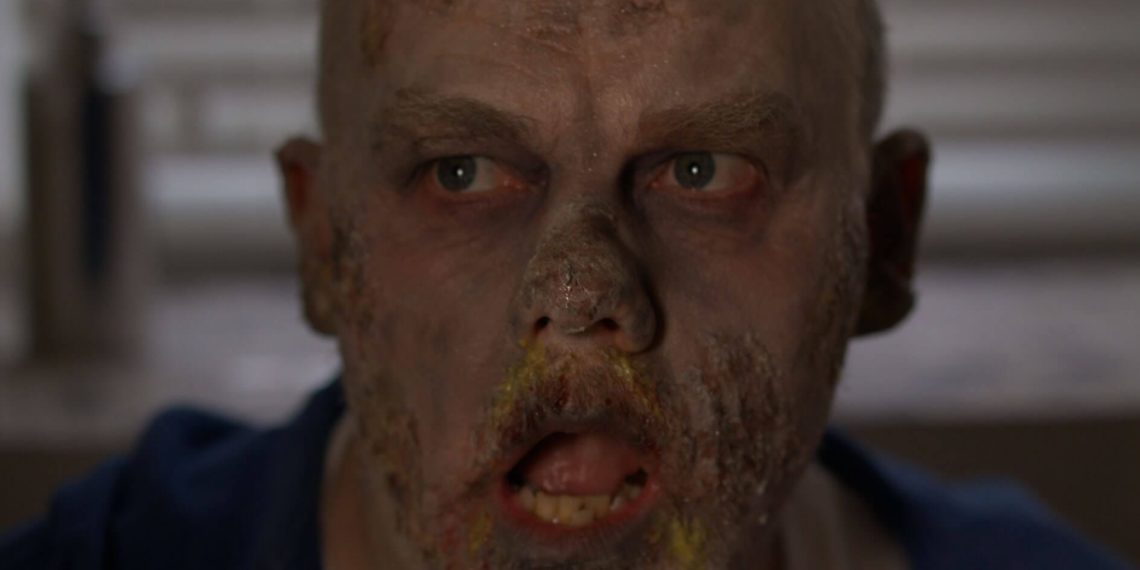 Alasdair McWilliams’s ‘Positive A’ is the second part of a written by McWilliams and Andrew Cant. But, before you heave a sigh, the film holds itself on its own. The movie sets off in what seems like an countryside where Jamie (Elliot Cable), a police officer, is called out of turn, to search the source of emanating from the neighbourhood house. Clearly not the lunch break he was looking for; Jamie drives off half-heartedly. Upon arrival, he gets the first report from a neighbour, Pat Simmons (Pamela Cook) who suspects Barrow (Peter Long), their neighbour to be dead. And, with we are ushered into the world of Jamie’s investigation.

Alasdair takes an unusually long time to establish the story line. Whether that was deliberate or coincidental is up for debate, but it certainly gives time to start rooting for Jamie, clearly the protagonist in this 19:57 minutes long film. The camera loves Jamie as does he; with the first seven minutes solely dedicated to him, his character arch is well built. Particular mention to the scene where he tip toes to Mr. Barrow’s house; the light streaks through the window pane; a beautiful kaleidoscope of light and shadow. Cinematographer Andrew Cant uses his lens to effortlessly capture the interiors where the majority of the film is shot.

When Jamie finally finds Mr Barrow, he is long gone or at least seems so that way. Alasdair certainly bids his time until this moment to bring in the real twist to the narrative. As you start churning out alternatives to where this movie is likely to head, the storyline plunges deeper into the sinister world of zombies and humans and you begin to gawk at the bizarreness of it all! When the diabetic Mr Barrow’s syringe accidentally pricks Jamie, paramedics and investigating officers are called in. A brief face-off between the authorities is shown, rather cleverly, to establish the backstory of the characters and the plotline.

Cable as Jamie outshines the rest. With more screen time bestowed upon him, it’s no surprise then that he justifies every shot reserved for him, by owning it. Cant’s cinematography skills notwithstanding, a bird’s-eye view angle, if used when Jamie nears the crime scene, would have captured the bucolic landscape of the countryside. Perhaps the character development is reliant on the prequels. Hence, for those not privy to the previous shots, this may come across as a tinted take on an otherwise overly exposed genre.

The usage of variance of soft light to high-key light balanced with fill light raises the aesthetic quotient. Christos Andreou’s music gives the perfect feel to film, alternating between uneasy to thrilling crescendos. All in all, ‘Positive Action’ is a treat for zombie genre lovers. With a good screenplay and excellent acting by the lead, the film offers an interesting take on a zombie and his unsuspecting victim whose fate hangs in the air!