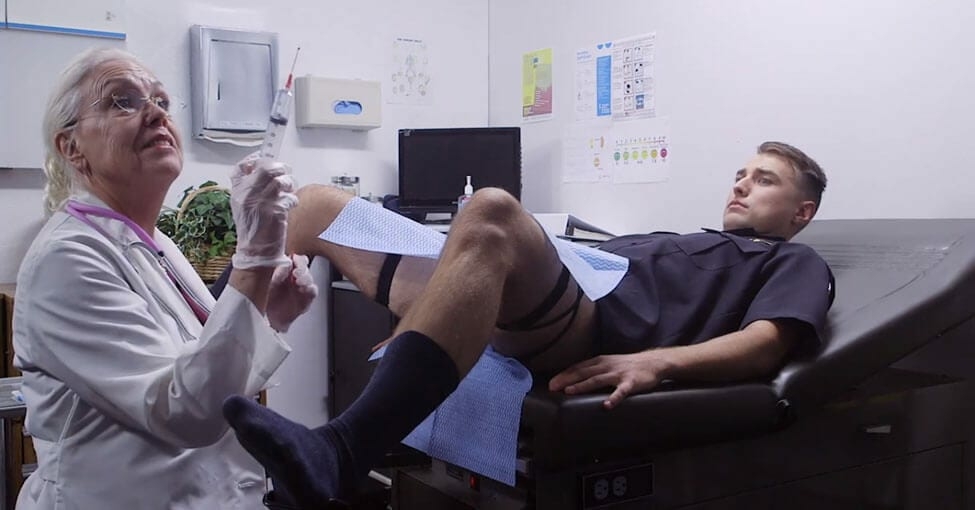 The neon lights give the film an upbeat start. At 7:37 minutes, ‘Bee Sting and A Horse Kick’ is however, a film that struggles to retain that cheer. The narrative is simple but scattered in its approach, often times making one wonder of its true genre. Centered on the concept of vasectomy, the film follows a couple; Sophie and Cleft as they go about making the most important decision of their life.

Cleft (Lane Williams) is a cop, his profession an obvious choice made to conflict with his personality; his character appears singularly dimensional, with only his uniform being the layered facet to him. He is compassionate, caring and perhaps the most accommodating partner one could hope for. His character is written with the intent of making him likeable. Sophie, on the other hand, played by Tiffany Sherie Neeley, is the layered one here. You constantly wonder at her intent and what she is capable of doing next.

The plotline of ‘Bee Sting and A Horse Kick’ is simple and the narration is kept deliberately simpler. The couple arrives at a clinic, for a surgical procedure scheduled for Cleft. Right from the onset, the clinic, its staff and everything about it looks anything but medical! Because of his fianceé’s reluctance to have children that might jeopardize her future, Cleft decides to bear the burden of surgically holding the relationship together, literally – he decides to have the vasectomy.

Unfortunately, the characters are so predictable, that you’ve a fair idea of where this is heading to. And, you wonder how Cleft can’t see what’s plain for all to see! The cinematography does appear amateurish, whether this was deliberate or not is open to debate. Although its apparent right from the start that the characters are quite unlike one another, their motivations aren’t well established. Their incompatibility evident, the reason for them being together remains the million dollar question!

The film’s humour is entirely on the male protagonist. Not only does his character become the joke, but so does the plotline after a certain point. The absurdity of it all makes one wonder at the nature of the film and it then dawns – sometimes it’s so tragic, that it seems comic. With of simple frames and elementary editing, the film is made to look deliberately simple. There is no depth to the characters or the plotline, beyond the obvious.

The title of the film, however, does have a hidden annotation to it. By the time you reach the last frame, you literally cringe for Cleft and have your own Eureka moment as you crack the code behind the title. Written and directed by David L. Williams, the ‘Bee Sting and A Horse Kick’ is a comedy; but carrying an important message, that seems to have lost in the absurdity of the plotline. It’s definitely worth a one-time watch if you can sit through a dentist working his/her way into you; except that this cavity is placed somewhere else!

'Eros Point' Is Unlike Any Other Love Story Seen!