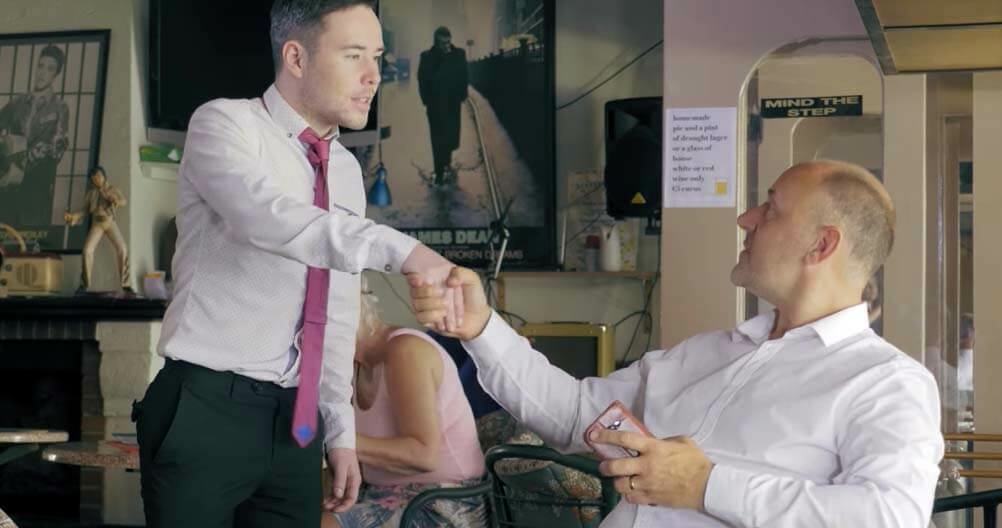 You are sure to reconsider the next call you get for an interview, especially if you know the venue. For, Dan Summers’s ‘The Job Interview’ is about one such bloke whose interview call leads to a disastrous spiral.

Tim (played by Josh Dineen) meets with Mark (played by Dean Kilbey) early in the day for an interview, and the latter persuades him to have a drink, which soon becomes plural. They are ushered out about an hour later (or as Mark might object, three minutes short of), drunk and chums. They head over to another watering hole to continue the spree where Tim is confirmed and he promptly sends in his resignation via text.

While Tim is uninteresting and predictable, his gullibility is a dead giveaway to the trajectory of the plot; Mark, on the other hand, is outright dislikeable. True that this is perhaps meant by design, however, in the process between the conception and the portrayal and the time between the opening shot and the conclusion, the character becomes insufferably unpleasant. So much so, that by the end, the viewer’s feelings about the merit of the film might entirely be drowned in their cringe at Mark. His sloppy, stained clothes are, it must be admitted, a nice touch; an appreciably subtle clue to the punch line.

One of the few comic scenes occurs during their transit between two establishments, achieved with rapid cuts that are often found in this genre. The camera stays pointedly focused on the two characters throughout the film, bringing and anchoring the viewer’s attention squarely on them. This has a humorous element of its own, but when they are settled in the properly sloshed category, the camera assumes a character, a third drunken companion.

‘The Job Interview’ mixes alcohol with humour at the expense of the drunken stupor and small talk to set up a more elaborate joke. Whether that works or not is up to the audience. But, a comical play out of an employer and his candidate has never been more becoming on a runtime of 8:43 minutes.

Alexandros Mattei’s editing and director/writer Dan Summers’s work is well intended and succeeds at large in its mark. After all, ‘The Job Interview’ is about those chances that are best left unexplored!