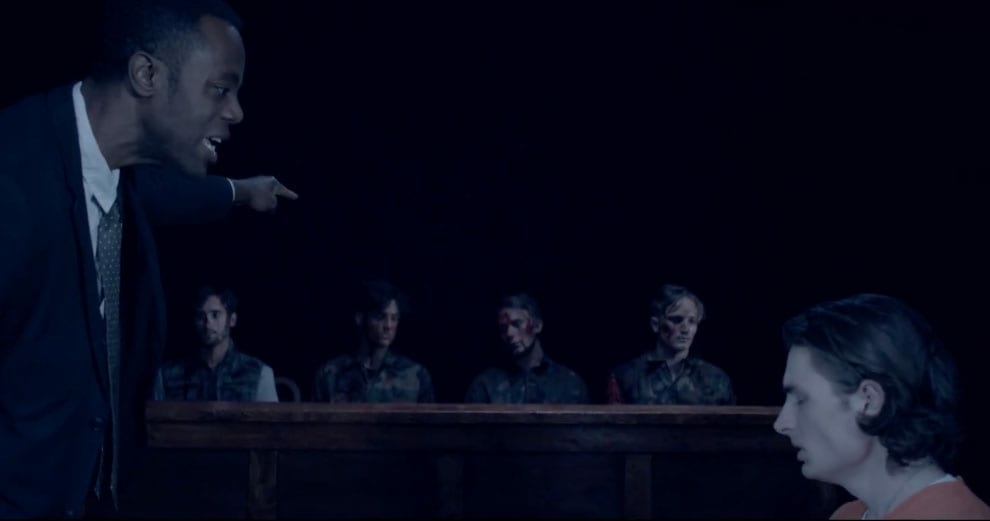 Trauma holds the ability to break even the most resilient minds. It comes with a heavy price costing the one suffering from it whatever they hold dear the most. ‘Hearts and Minds’, manages to convey the relentless agony of a mind through a unique, at times charring narration. Written and directed by Michael Heaton, the film portrays the perpetual struggle of Liam, an ex-army veteran returning home after his military service. As he tries to redeem himself from the shackles of his past with persistent efforts and longing to be with his family, the film captures in its finest moments the isolating traps of a PTSD sufferer.

Having a runtime of 11:14 minutes, the movie begins with derelict undertones from Liam, as he faces an impossible task ahead of him; that of confronting his past. He sifts through the memorabilia and photographs reminding him of the yesteryears at the academy. Old photographs stirring deep emotions in him, he impulsively tries to reach out to his daughter, Abby. His wife and child living in almost what seems like a parallel universe to the black hole he is entrapped in.

‘Hearts & Minds’ explores Liam’s conflict; the entrenched guilt tearing him apart from his love for his family & the slow succumbing to it. His incessant guilt that holds his mind hostage and his past with his teammates and their shared history that makes for his nightmares: this is Liam’s universe. Add to that, the pain and misery caused to his family and teammates leave him completely debilitated to perform even mundane day-to-day tasks.

However, the story doesn’t simply end with his struggles. It showcases how Liam strives to find the will and motivation to endure all tumultuous challenges ahead of him, which is a journey in itself. The story is engaging despite an overused concept primarily due to this directorial style and the hopeful connotation added even on the pain and suffering of the PTSD patients. Ultimately, the film is about the compelling drive that only a family can provide with their love and support to help overcome the trauma or any challenge for that matter.

Produced by Lucas Caputo, the film helps in bringing to life with its poignant narration, the challenges faced, the struggles undertaken and the sweet release of triumph and surrender in the end in the most interesting manner. Touching performances by David Holmes Watkins, Kristina Hampton and Sophia Reid Gantzert, make the film even more convincing. Breath-taking cinematography showcased by Eddie Gergie Foster adds layers to an otherwise widely popular theme. Graceful attention to editing by Isadora Kallina De Paula, makes the narrative smooth and effortless to watch. The review wouldn’t be complete without special mentions to Michael Chambers for orchestrating a delightful film score.

All in all, ‘Hearts & Minds’ is just as its namesake; all about the heart and the mind and the collective universe, it forms.