‘Borrowed Time’ Is A Story That Breaks Your Heart, Only To Mend It Again… 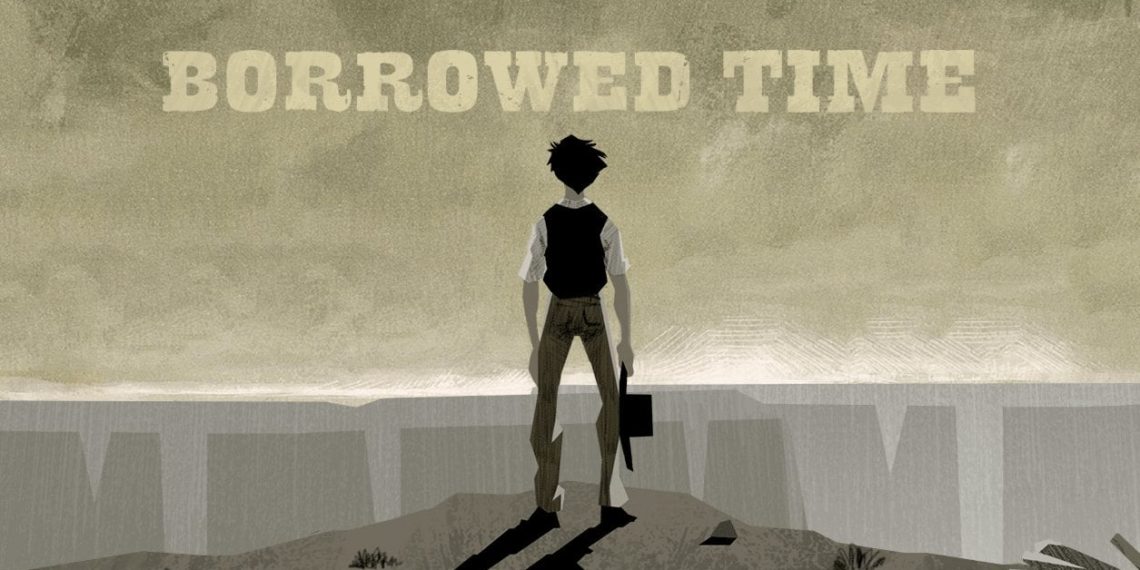 The screen opens to a canyon, gaping wide, open to swallowing anything that reaches for her. The wind howls softly as if not to hurt the man any further. We see him, standing across the ravine, alone and defeated. Gustavo Santaolalla‘s music pauses to let us hear him breathe and we sense the resignation in his ragged breath and slumped shoulders. He removes his hat and we see it in his eyes – the pain of a man who has suffered losses.

He is a Sheriff, weathered in time & experience. Silver strands inching to his temple & strands of grey in his stubble, his eyes looking drawn as if he has retreated into a distant past. Soon Andres Coats & Lou Hamou-Lhaj (Directors) take us to the yesteryears of the Sheriff.

We see him as a boy, sitting bored next to his father, a Sheriff himself. A shining pocket watch gleans the sunlight into his eyes and he looks up to his dad, who proudly hands it over to the son. We are immediately brought back to the present time. The little boy is long gone. The eyes are the same, but the glint is forgone. Today he is a man who is carrying the cross of an unimaginable mishap. He gulps at the mere thought of its flashback.

As the Sheriff looks ahead, the dust unsettled in the wind, you see his future through his eyes – bleak & hopeless. He trudges along, his spurs announcing the effort he has to make as we see the accident as it would have happened, ages ago. We relive those heartbreaking moments as a little boy loses control over the reins as his father deals with an armed attack. We watch in horror as the wheel hits a boulder and causes the carriage to swerve throwing the little boy off his seat.

The horses neigh, the carriage breaks apart and the father is flung off the cliff amongst detritus that leaves behind shattered pieces of an unfulfilled journey. When the boy wakes up to find his father hanging by the cliff, hopes are renewed and efforts are made.

Today, the place holds the vestiges of that accident. There remains the bones, the shattered fragments and the broken spirit of a boy who could never forgive himself for the accident. As he edges closer to welcome the relief, his eyes are distracted, once again, by a forgotten friend: the pocket watch. It survived, as the sole witness of a dreadful tragedy. He reaches for it & dusts off its hunter-case; only to find in it the portrait of his father and himself when he was a little boy. Holding it close to his chest, he mourns his loss & then makes peace; with the rising sun as the testament of a renewed life.

‘Borrowed Time’ is gripping, moving and soul-gratifying. Written by Andrew Coats, Lou Hamon-Lhadj & Mark C. Harris, the script is water-tight. The direction and animation carries a heavy print of Pixar’s work and the music is complementary. It’s everything that you wouldn’t expect out of an animation; it’s everything that is perfect in an animation.

Watch ‘Borrowed Time’ to understand what weighs down the Sheriff’s heart. It’s a lesson for all those struggling to let go of their past and crucifying themselves for its happenings.

‘Borrowed Time’ Is A Story That Breaks Your Heart, Only To Mend It Again…
3.8 / 5 Stars
Direction
Cinematography
Screenplay
Editing
Music

‘Here Lies Joe’ In An Unconventional Tale Of Hope Finding You!