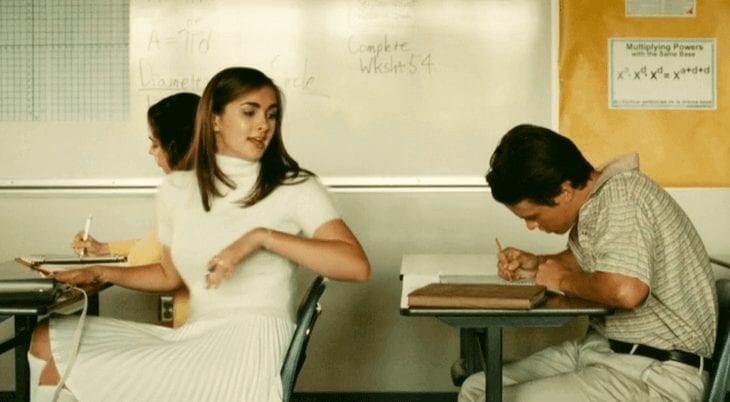 Directed by Lifan Wang, ‘A Hero for a Day’ is a short film on how bullying often awakens the unimagined in you. The screenplay by Shannon Brunetti & Lifan Wang is actually based on the novel “Planning of Campus Shooting” by Ke Liang.

It starts with an escalating sense of foreboding, with Hero (Colton Shires) staring right into the camera delivering an impassive speech on the ensuing events. The audience is then snapped into the nucleus of the story with a quick rewind.

Here, we are introduced to the painfully shy, reserved Hero who has become a magnet to bullies. Bitterly angry at his own inefficiency to deal with his tormentors, his alter is born. Meet Rage (Erik Reedy) who in his efforts to elicit some response out of Hero, cajoles him, implores him and at times even downright insults him. None of this helps Hero outgrow his conscious self until a new entrant at school causes to cease Hero’s non-existence.

A popular face walks into the classroom and becomes the centre of everyone’s attention, including Hero’s. She (Anna, played by Katie Liz Robbins) quickly grows to become the only beacon of light in Hero’s dark tunnel. However, all hopes of a blossoming romance are thwarted when Hero’s nemesis and the school’s popular boy Dawson (Austin Brook) bonds with Anna.

When even a suicide attempt goes unsuccessful, Hero & Rage together fuse a plan to let their silent suffering create chaos in everybody else’s life. The intent to terrorize in order to be remembered is the sad depiction of reality here, as has been observed in real life too. Hero comes to school, prepared to let his bullets do for him what he couldn’t for himself.

But as fate would have it, an unexpected turn of events makes Hero question his abilities and intent and as the adage goes; in desperation, some often turn out to be the best versions of themselves.

Watch ‘A Hero for a Day’ to find out if Hero’s plans succeed and more importantly: understand the dynamics and complexities that seem to be trespassing underneath the characters here.

The acting, monologues and the duality of each character is well-written and executed. The direction and cinematography articulates the narrative quite well. A Hero for a Day isn’t your regular tale of high-school escapades. It’s a story of complexity, subterfuge and finding a voice when no one seems to listen.