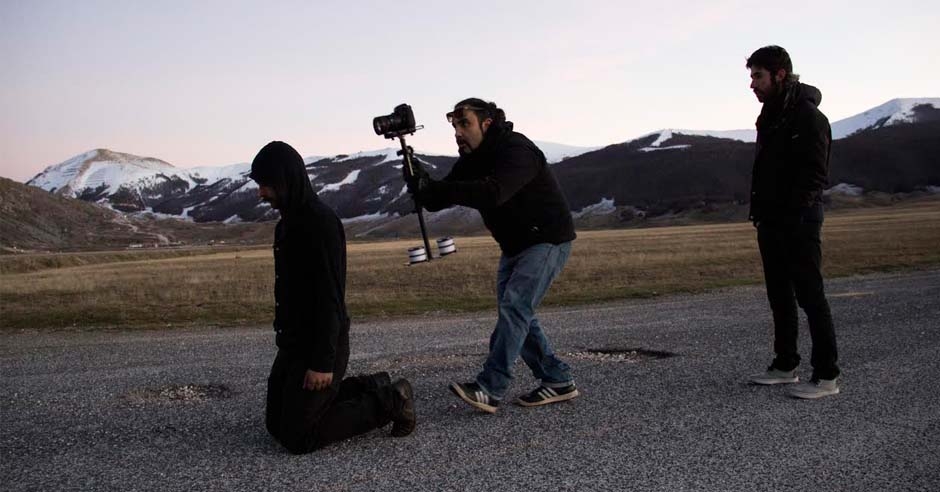 California a four minute music video directed by Marco Gallo delivers some brilliant music and story stitched seamlessly. After winning an award for the ‘Best Music Video’ at Short of the Month’s June Short Film Festival, here’s what Marco has to say.

So Marco, as I type this question the song is still playing in the background and ‘ California’ is certainly going on my recent favorite playlist. So, let’s start this by asking you about how did this idea of music video came along? What was the inspiration behind making California?

The idea of this music video came from Stefano Di Pietro, the vocalist, he was the one who gave some directions about what he wanted to tell, the feelings that he wanted to express through this video. Then together we worked out how to represent his idea in a three-minutes-video, and with the equipment and budget available. But one of the first things that came out of my mind was using fire with the great fireman Chntico, I knew he had to be the link throughout the whole story. It was written.

The band – Mad Shepherd – delivers a tremendous music for California. Stefano Di Pietro, Salvatore Dragone, Pierfrancesco Leone & Marco Forenza give us a splendid performance in the video. How did this collaboration take place? Was this the first work done under this collaboration?

There has been a fantastic connection between Mad Sheperd and me since the very beginning; today they are friends to me and I go often to listen to them live. There was a great enthusiasm during the shooting because we all knew what we wanted, everything was going fine, and only with enthusiasm, you can shoot a whole night outdoors, up to a mountain with three degrees! Indeed, we had a few shots of Vodka or Rum just to keep us warm, and at the end of it everybody was pretty happy…

California has some breathtaking visuals, stunts, performances and a beautifully written & captured the romantic drama; all edited seamlessly. What were the key points in your mind while you were directing your actors, cinematographer & editor?

Thank you so much! It is so rewarding knowing that people are appreciating our job! As I said before, the key point in my mind throughout the shooting was the fire, which was the main link between the outdoor scenes of the band and their indoor ones. I really think that this video has achieved so much, and it won this prize (and many others), thanks to the great photography edited by Matteo De Angelis. He has done a great job, he took care of down to the finest detail; he created a movie out of it as I first imagined it.

Directing the actors has been way too easy. Giulia Michelin and Andrea Napoleoni were amazing. Although she is pretty well known in Italy, she has proved to be such an open professional and so sensible. Matteo identified himself with the character so well, both always asking for suggestions about what was better for the video. Their trust towards me has been such a great reward. For sure nothing of it could have been possible without the help of my troupe, who set-up the location (that was completely empty when we arrived) and supported me during the shooting.

Also, this makes me ask you if California is your first music video or have you worked in this category before as well?

Absolutely not! I work mainly with the music video. Maybe one day I will get back to tell stories through movies or short movies. But today I enjoy making music videos. It’s a different kind of movie, there so much more freedom and it lives through music, and music is my life.

California won an award for Best Music Video at Short of the Month’s June Online Short Film Festival; it’s not always easy for a music video to make its mark given so many people are coming up with their own bands and music videos. California, personally for me, stands out in terms of its direction, kudos to you and your awesome team, which really delivered something worth watching. Marco it was a pleasure watching your work. To end this; when can we expect another music video from you and your team? Or will it be something else this time?

I will definitely work again with Mad Sheperd, maybe in October. There are many other videos on my website www.marcogallo.it and who knows, maybe some of those will join again the Short of the month. But for now, thanks, thanks, thanks.

Piyush Srivastava is a writer, director, and actively involved in the Indian animation industry. He is an admirer of horror and thriller stories. His own attempts on making horror and learning from his experiences allowed him to write this article. His latest film is a horror short titled 'A Tale of an Onion Witch', currently doing rounds across the globe. You can reach him on pspiyushsrivastava@gmail.com