Four Minute Warning: A Bottle Film That Banks On Comedy To Drive Home A Significant Message 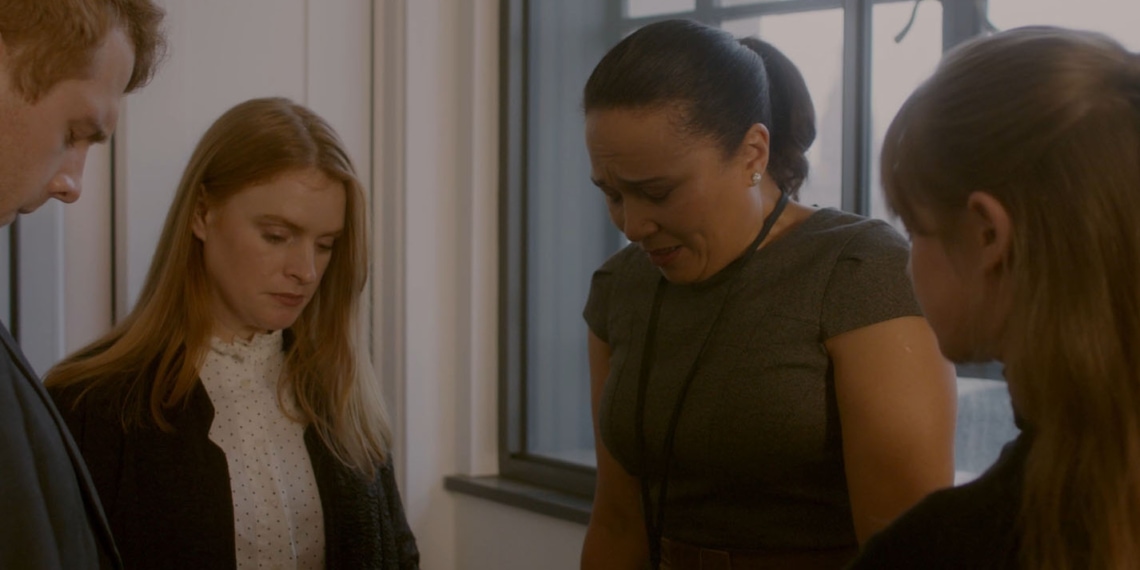 Despite its unusual setting, writer-director Chris Hallas’s Four Minute Warning couldn’t have hit any harder considering its relevance to what the world is already witnessing. The pandemic and the subsequent lockdown have altered perspectives, perhaps forever. And, Hallas, couldn’t have timed his film any better. Without being preachy or relying on the usual emotional drama that films of its genre depend on, Hallas quite smartly presents his 9:21-minute short as a comedy, with a dash of thrilling drama.

The woman-in-charge of the interview (Amanda Gordon), a confident, in her mid-40s’ senior has three freshers before her, all equally tense, but seemingly well poised for their test. With this opening shot alone, Hallas establishes the gender and demography of his characters, only to then surprise his audience by flipping it until they can no longer tell one from the other. While the characters (all four), remain nameless; their identities are cleverly revealed in layers, which play a crucial role in understanding the subtext of the film.

It is to Hallas’s credit that despite his characters not having a proper introduction, we identify and remember each one of them—thanks to their idiosyncrasies. Take, for instance, Shona Graham, the youngest of the lot. References to her age are ingeniously placed in the dialogues where she mentions being 14 in 2012. Or, Rosie Steel, whose composed nature shines through as she manages to be a good buffer between Sam Tutty, (whose know-it-all could have been easily bothersome had it not been for his charming self) and the rest. Oftentimes characters are introduced to make them fulfill the arc of the protagonist, but not in Four Minute Warning. Each of them have their own arc, their own person that they bring to the screen. And, it would be unfair to only credit the writing for making the viewing experience wholesome, because had it not been for Gordon, Graham, Steel, and Tutty, the film wouldn’t have had half its punch that it managed to raise.

Cinematographer Aidan Bryan has much to play with; both as a challenge and a creative exercise of his craft. This being a bottle film, it must have posed its own challenges, but as highlighted by many cinematographers in the past, it only piques their enthusiasm. While the colour palette (Colourist: Rebecca Goodeve) of the film remains steady and sober throughout its duration, it is interesting to note how Bryan isn’t tempted to dramatise his lensing, despite the storyline. In fact, it is in his restrained and stable camera work, that the plot bears its hallmarks—that of being a deep, thought-provoking, and philosophical short, well masked under the garb of a comedy. Additionally, it takes skilled editing for a film of its length to not lose the timeline to redundancies. Sasha Moon, whose editing not only manages to achieve this but also the necessary pace for the film, helps build the tense environment for its climax.

What works in Hallas’s favour (besides the brilliant writing, of course) are his cast and crew. The cast, for instance, shares natural chemistry that plays off well on their dynamics and differences. When they get trapped in the midst of an ongoing interview, the pretenses begin to drop. Manners and etiquette take a beating as all begin to face their common enemy—time. It is hilarious how the dialogues, so well written translate to the screen in a spirited flow of witty remarks and sarcastic puns. Each of them bringing their own brand of humour with it offers the audience quips that might quite easily resonate with them, especially considering the times.

Liam Colomer who manages to let his composition remain a subtle companion to the plotline offers enough hints of the impending events. An incredible move, considering how it takes the audience a second viewing to actually take note of this. It is pleasantly surprising how everything falls into place for Four Minute Warning. While quite a few films have been made during the quarantine that reflects the pandemic, isolation, or the predicament at large in desperate and philosophical ways, Hallas manages to drive home the point quite simply. Just as in the pandemic no one is spared, time too is unsparing. And in confronting one’s final hours, we all shrink back into that atom that simply has one more desire to fulfill, if given a chance. And, in presenting a story that makes four people confront theirs in all their hilarity, Hallas convinces his audience to confront their own…

Stay tuned for Mark Owen and Eliot Kennedy’s ‘‘Four Minute Warning’’ as it quips to life in the end.

Four Minute Warning: A Bottle Film That Banks On Comedy To Drive Home A Significant Message

While The Cat’s Away…: Brilliantly Executed Quirky Short On Someone’s Idea Of Idling