The Mole: Questioning The Double Standards Of The Society 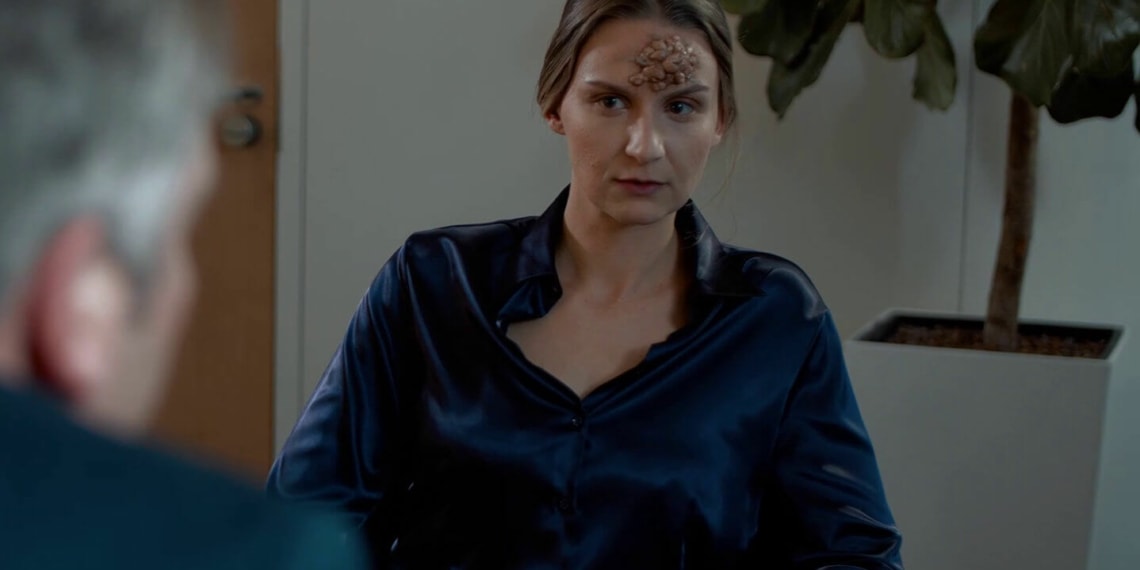 This is not an educational or philosophical film. It does not give answers. Instead, what director-writer Ambrose Smoke’s 19-minute short does is raise pertinent questions. Questions that should be asked more often. Questions that could potentially bring about a conscientious change into fulfilling our destiny as human beings.

What’s the most defining aspect of human life, one might ask? How far is one willing to go to be accepted by their times and contemporaries? The Mole is a corporate drama that centres on Angie (Lauren Engels), an unapologetically ambitious woman whose landmark career moves and gains have only earned her envy, if not outright hostility from her colleagues. As if apologising for one’s ambition (often addressed as greed), especially if that individual is a woman, were not enough, Angie has something, in addition, to apologise for: a face. One with an appalling abnormality.

Before you think of a mole as too insignificant to be noticed, imagine it to be bigger than the mass of your nose and be visible. Now that it has caught your attention, imagine living with it, or having to simply look at it, daily, either as the bearer of it or as someone who knows her.

Smoke takes good care to present Angie, a fact that is noted right with the opening scene, so that we remain prepared; and yet are caught off-guard. The credit to this should go to the cinematography. Benjamin Reynoso’s eyes pick on her nervous clasps, the HR manager’s (Iván Gordillo) slamming of the desk, all routine-like, regular and perfectly believable to have happened. Well-angled and thought-out shots like these help maintain the pulsating moments of the film.

As Angie goes up the corporate ladder, her friend Becca (Benita Katende) becomes her conscience. The dialogues are very well written, especially when these two are involved. As they go back and forth discussing and challenging one another with their polar opposite perspectives, it is interesting to see female characters play both the ally and the contrarian. But Angie’s corporate success, even if it comes with an understanding boss (Jonathon Sawdon) is not eschewed from office gossip and snarky remarks. Try hard as she may, her identity is reduced to a congenital defect, simply because it is visible to all. Would men have to face repercussions on the same scale? Society is unbiased in its harshness, if not in gender equality.

Her boss gives her the platform to outshine herself, a rare opportunity before the conglomerate, Mr Katanga (Clovis Kasanda), and now as she is inches away from the dream, she is bitterly reminded of the price it bears. Music is sparingly used in The Mole, making most scenes hard-hitting. While the editing tows the film into a rushed pace, it works, as we see the quick rise in Angie’s career and her seemingly perfect life. Becca and Angie share an easy, familiar chemistry, something that reflects on Katende and Engels’s acting prowess, but it is Sawdon who owns his character like the back of his hand. And effectively it is through him that we see the dichotomy of the society that on one hand preaches to be inclusive and accepting, while also being responsible for its binding conventions.

The Mole is an important short that picks apart the beliefs that have been fed into society’s collective psyche for so long. By presenting the story of a woman and the devastating measures the world compels or rather corners her into taking, in order to simply survive, should stand as a reminder of how far (or back) we, as a society, have come in time.

The Mole: Questioning The Double Standards Of The Society