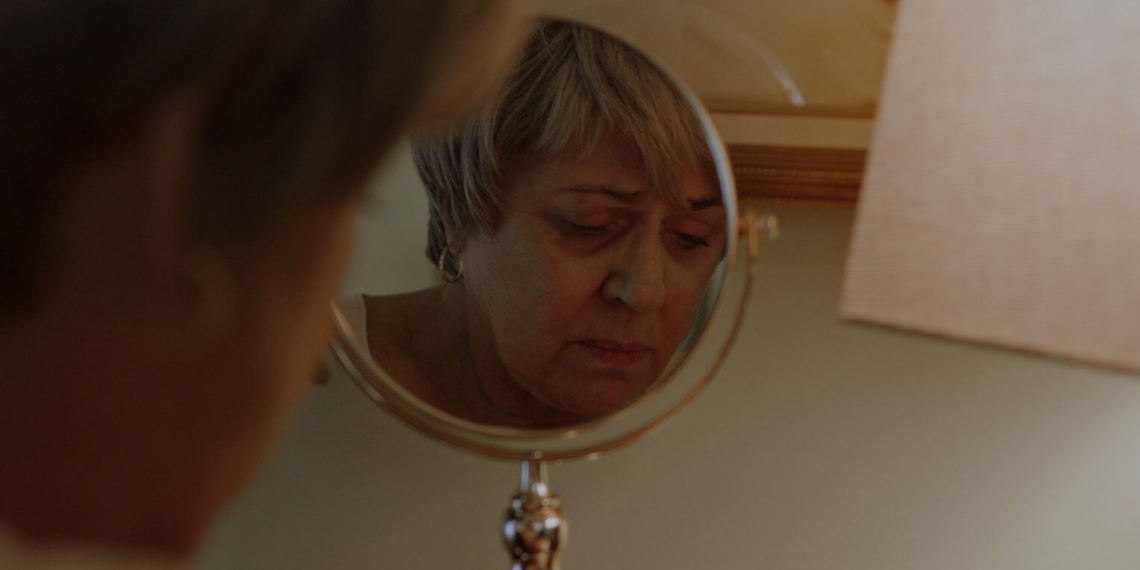 Everything about writer-director Bruna Cabral’s Piece of Me feels tender. Like the tulips Mrs Brooks talks of, like the innocent glances she exchanges with her young friend, like the witty repertoire she encourages, the 19-minute short feels immersed in the beauty of the little things of life. Which is why then, when the film transverses into showcasing the debilitating effects of Alzheimer’s, it hits hard. The unexpectedness of it comes out of nowhere, forcing one to confront their helplessness. That it is shown through the eyes of an 8-year-old, it simply makes Piece of Me that much more impactful.

Cabral takes her time to build her characters and their interpersonal dynamics. With just the two filling the majority of the screen time, Dylan and Mrs Brooks have enough on them to convince us of their friendship, camaraderie and genuineness. The laughter fills our screens, even before we see them. Little Dylan, all of 8, competing perhaps with his most favourite person, Mrs Brooks, makes for a lovely pair. The 72 year age gap between them notwithstanding, the two share a sense of familiarity and comfort that is hard to translate onto screen, unless pulled off by credible actors. And to Cabral’s credit, Mason Wells and Roberta Sloan are as good as it gets. The two, brilliant performers in their own right, bring together an unmissable chemistry that makes watching their activities simply delightful.

Dylan, whose mother, Abby (Meghan K Lees) is the caregiver, brings him along to Mrs Brooks’s house. The two bond over puzzles, games, and easy conversations. While one fills the other with his latest, ever-changing fads, the other reminiscences of her bygone days, and the conversation never feels stale. The writing is noteworthy, as the dialogues are neither overly dramatic for the sake of tragedy or impending doom, nor are they too poetic—a mistake often made in films of its kind. The conversations go back and forth as easily as their routine.

Teodora Totoiu, whose cinematography offers some very interesting angles (especially in the puzzle-playing scenes), maintains a steady hand—a remarkable feat considering the difference in the age and physical composition of the characters involved. At no point is there the downplaying or upstaging of the actors to overemphasise their journey. It is in this simplicity, or rather, the realistic handling of the camera, that we get introduced to Mrs Brooks’s spiral from Alzheimer’s.

While Juliana Lemes’s editing keeps this drama steady and evenly paced, the lack of hurry, once the character begins to lose herself to Alzheimer’s, makes the viewing difficult. The slow descent is hard to watch, and harder to accept, just as it is for Dylan. Wells’s performance is simply incredible. His marble green eyes have each flashing thought making its presence felt. The anguish of losing his dear friend, the dread of being forgotten, the despair of feeling utterly helpless—all so beautifully picked by Wells that it is hard to imagine any other child actor cast in his stead. Pietro Milanesi’s composition is another crucial element in making this film such a success really, getting the pulse of the story spot on. There is warmth here, generosity, and unconditional love that is otherwise hard to find, and Milanesi’s work reflects it brilliantly.

Presently, medical science has not found a solution to this illness; the end card leaves enough stats to inform us of this, but Cabral nevertheless does not soften the blow for her audience. As Dylan tries his best to hold on to Mrs Brooks, she too is desperately trying to hold on to herself. The sheer cruelty of the disease becomes evident, not in the confused demeanour exhibited by Mrs Brooks, but in her abject loss of herself and the moments that summarised her 8-decade long life.

As the film closes, there is hope, perhaps not for Dylan, as much as because of Dylan. Piece Of Me is an important short that educates and informs its audience about Alzheimer’s and the heartbreaking path to losing oneself to it, through the innocent, but wise eyes of a child. And in doing so, the aged and the young come in unison, to form an enmeshed life story of friendship, hope and care.