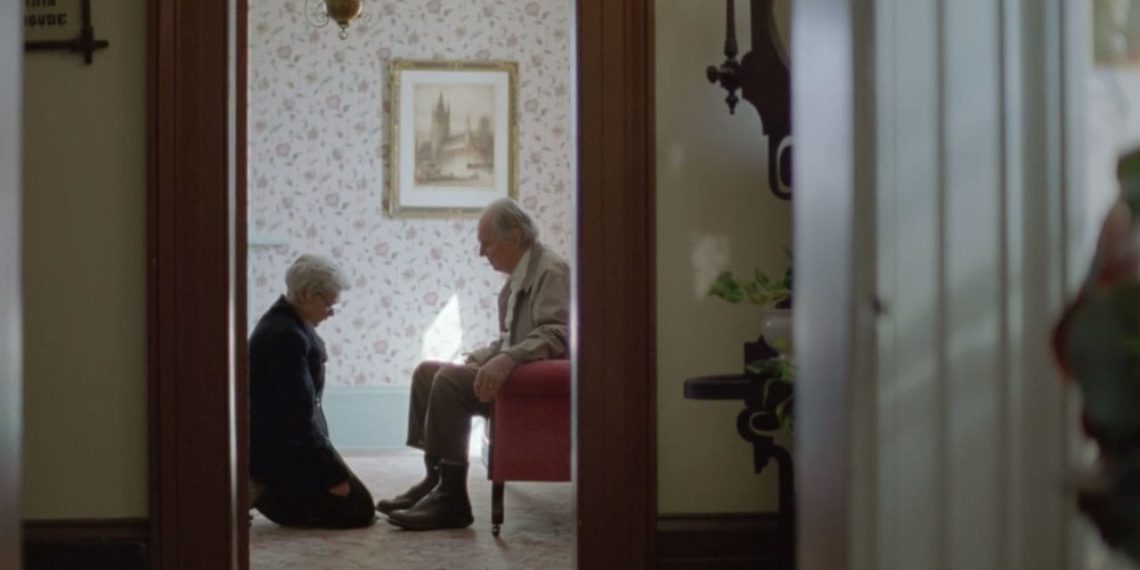 Writer-Director Kalainithan Kalaichelvan’s Petit Four is a 12:48 minutes long saga of love that was once deeply cherished, but eventually lost in time. Beautifully poised in its cinematic appeal and pace, the film pays homage to deep, rich love stories that don’t need youth or its effervescent charm to be impactful and hitting.

Peter Higginson plays Wilfred, husband to JoAnn Nordstrom’s Agnes. In the grand, empty spaces of their home, these two come across as souls lost in space and time. Their silences filling the dinner table, they sit across one another with limited dialogues to recover the time lost, but enough glances to outlive one another’s thoughts. Written also by Kalaichelvan, the script gives enough room for the characters to explore each other’s mental state while slowly unravelling their own.

Cinematographer Christopher Lew’s lens captures the couple, their silent retreats from one another, longing despairs, the long shots across solemn benches and close-ups as the couple cranks each other’s spaces. If anything, it only makes Petit Four more engaging and raw. As Kalaichelvan’s background score soulfully pulsates through, it’s impossible to overlook the film’s nuanced narrative style.

Love stories have their own charm, but the ripe old ones carry an added weight to them – they ring in the nostalgia understandably missing in the young ones. But what Kalaichelvan does here is, twist it and serve you a cocktail of suspense, thriller and drama. What makes Petit Four is the fact that the movie can be enjoyed individually through any of its mediums and it can yet bring you to the same melting point. Whether it’s the music or the cinematography or acting, the story carries with it the same impact, hitting the same notes, parallelly running through invisible crossroads to meet at the destined point.

Reserving the true suspense of the film, when one of the characters begins to grow suspicious of the other, the range of emotions displayed is spectacular – ranging all the way from disbelief to resentment to resignation. Enabling to sustain the film’s set theme, is the lighting which is just brilliant. Lew knows his craft well, playing it to the fullest advantage. The soft hues representing the warmth of companionship and the sombre shades, the grimness of the times – we get what it means to have lived a full life and shared it with someone you deeply, deeply care about.

The casting is perfect as is the makeup and hair. Both Higginson and Nordstrom bring Wilfred and Agnes to life. We can very well imagine them as a couple we’d have seen in the passing. Such strong is their conviction that as the film nears its climax, we are unprepared for the outcome, while all the way knowing where it is heading to.

Petit Four is unusual, in the sense that it opts for a cyclic narrative while offering no closure to the sequence of events. Instead of answers, it raises more questions, which only a skilled filmmaker could have done. Be it its music or cinematography, each department adds layers to the sublime story that is being put together here – that of love, resentment and profound loss.

#ShortFilmReview: Petit Four: It was a ghostly affair, a ménage à trois of the strangest order. Click To Tweet

Silhouette: A Woman’s Challenging Journey To Accepting Herself