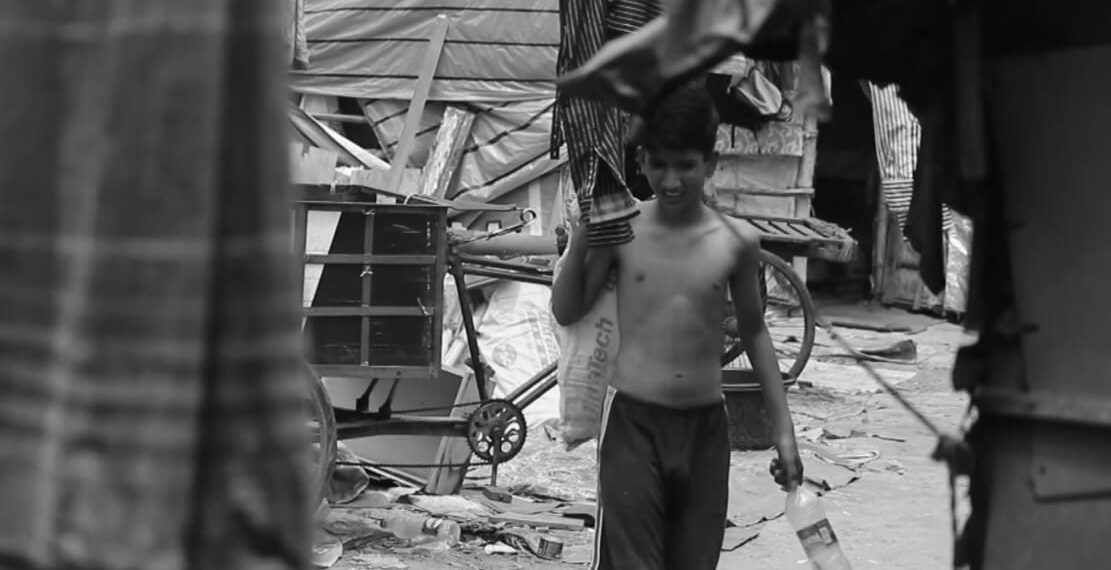 I woke up from the dream and tasted the aesthetics of reality but it was bitter. I added sugar to sweeten it but to no avail. I preferred to go back to sleep and pretend it never existed…

Udaan (Flight in English) is a 10:15 minutes long (Bengali) film directed and produced by Kuntal Paul raising awareness on child labour and education. The story opens to a panoramic shot with two distinctive lives running parallel in a dual narrative. One of them being that of an underprivileged child whose life is in stark contrast to that of the other, a privileged one for whom necessity and luxury blur into the same territory.

The story centres on the life of a vagabond scrap picker whose days start off with the struggle to meet the basic requirements of existence such as food, drinking water & shelter. Kuntal Paul doesn’t waste time preparing her audience. Right from the onset, the narrative dives straight into the reality of matters. As an audience, your soul is stirred the moment you see the scene where the itinerant boy eats a leftover from the streets. The scene makes you acutely aware of the dark side of the society. You realize that when the onus of survival weighs upon your mind, everything else becomes marginalized into luxury, even education.

The story, however, loses its grip when it comes to exploring the boy’s psyche. You see him scribbling on the streets and the two strangers who come to have a word with him. You get the sense of the world becoming his slate but the strangers prove distracting, at best. Whether it was a deliberate attempt to add thrill to the narrative or simply a case of failed portrayal, remains a debate.

The premise of the film is simple; however, the dialogues could have been a tad bit better. The film is shot in real locations making the story believable. The music by Bhaskar Ganguly, although good is placed ineffectively and deserved better usage. The film does lack finesse. Editing by Abhijit Dal, perhaps with the intent of making it affecting gave the film sharp cuts robbing it of its pace. The use of colours remains a noticeable element throughout with hues of monochrome used to present the underbelly of the society and its insufferable apathy to the downtrodden.

The film tries to unveil the harsh reality of life, whilst ensuring there is hope for the future. However, disappointingly, it ends with a monologue which doesn’t really strike the chord, making it seem rhetoric instead. The script could have added layers to the characters rather than making them seem so singularly chiselled. Perhaps it’s the paucity of time or the fear of losing the motive behind making the film that rendered a wonderful story an amateurish touch.

Nevertheless, it’s a story that by virtue of its intent and content is worth a watch.

‘LUCID’ Recounts The Life Of An Ex-Addict…